My New Mexico move came in a fit: driving from Reno to Santa Fe, with only the things I could carry in the back of my car. To be fair, I had a little extra room at the top I could have filled the car with. But, have not, want not, it’s all just material possessions. It’s not like I was trying to move my 18-year-old cat. (She’s living happily with my dad in Carson City.)

All the art I collected from Reno’s fabulous thrift stores (I write truly and without a hint of irony or sarcasm) had to be put into local storage. I had no room to bring it with me, I had no space when I arrived. The collection stayed behind.

I’ve since moved from the first space, in Santa Fe, where I could not feasibly put my own collection up. (Most of my former roommates were artists themselves, their work adorning the walls.) The move was to a one-bedroom casita, with a kitchen that flows into a living room. Lots and lots of wall space.

On Sunday, I was out and about in Santa Fe. Specifically, I went to see a play called “Revelations,” an unfortunately unfunny comedy. The actors and actresses were primed to pause for our laughter. Alas, it never came.

After that, I went to go to a local box store to pick up a over-the-door shoe holder, an attempt to try to get some of the under-foot clutter out of my bedroom and hanging somewhere. It was a success and I was right next to the Goodwill in Santa Fe, so I popped over.

Lo and behold, one of the favorite paintings I’ve yet collected was  there, ripe for the cheap buying, which was a surprise. Normally the Santa Fe Goodwill overprices everything: $150 for a torn and ripped couch, $1-$5 for glasses (which cost $1 new), etc. 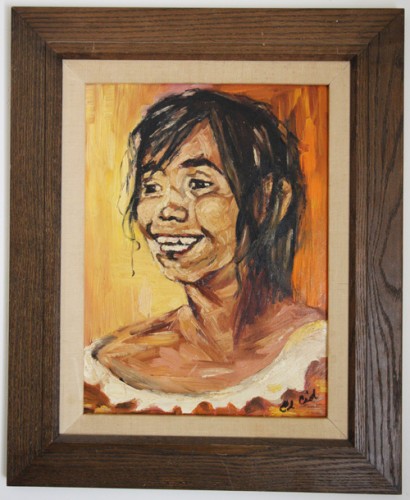 Goodwill: $7.99. It looks like the artist was aping the Gorillaz style.

A beautiful oil, with so much local flavor. It goes perfectly in the casita.

And then, a painting sans frame, this time much larger. Again, it was affordable. Again, I felt a desperate need to fill my walls back up, to make a house a cliched home. Plus, I just leave collecting used art.