This article was originally posted on Oct. 3, 2011, on my homebrew website, Fat Grey Tom’s Cider. It has been re-posted here with the same time stamp.

Not to say that we’re totally screwed, but, we may very well be.

You see, it was a long night of brewing, marked by blunders.

It started with a good dinner — vegetarian red curry. It was good. 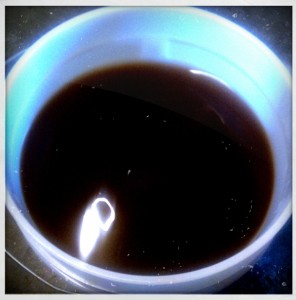 The Belgian Red — not sure if it will ferment.

We started brewing by boiling 3.5 gallons (we thought it was only 3.) We boiled it all in the huge pot, which turned out to be a good idea.

We put the 3.5 to boil, walked down to the convenience store to buy a package of ice, came back and the water still wasn’t boiling. We waited, it boiled, we added the Amber Malt Extract and Crushed Special B Roast and half the Styrian Goldings Hops.

We boiled it all for an hour, took it off the heat and put it into the fermenting bucket.

And then I realized, the recipe called for adding the other half of the hops at the last ten minutes of the boil.

So, I put the other hops in 1 gallon of water and boiled it for ten minutes. The recipe, however, called for the 1 oz of hops to be steeped in the off-heat wort.

Once it was boiling, we put all the ice we had in the house into the wort, which didn’t cool it down much.

And then we added the extra boiling 1 gallon of hops-water.

And were way over five gallons.

So, we took it down stairs to the garage (to get out of the kitchen, so my roomie who lives below could sleep) and put the lid on.

Around midnight, as I was falling asleep, I realized I hadn’t pitched the yeast yet.

I got dressed, tested the temp and found it to be somewhere really hot. Estimated around 90 degrees.

I pitched the yeast and went to bed. “Screw it,” I said to myself.

And so, now, the next day, no bubbles are coming from the brew and the brew store is closed on Mondays.

Alas, we have no ready home-brew. We cannot relax and have a home brew. Which is sad.

Next time, we relax.

Boil for an hour.

Turn off heat, steep the other 1 oz. Hops in wort for ten minutes.

Bring water up to five gallons.

Ferment for one week, about until fermentation is complete.

UPDATE, April 6, 2013: The original premise was correct. The beer has, so far, continued to be terrible. A 12-pack is still ageing, but the ageing only seems to mellow it, not make it taste less horrible.