This article was originally posted on Dec. 12, 2011 on my homebrew website, Fat Grey Tom’s Cider. It has been re-posted here with the same time stamp.

After our near-debacle with the pumpkin beer, we decided that a change was in order. And that change was a wort chiller: no more messing with huge quantities of pre-prepared water, of waiting for things to cool, of putting the glass carboy into a giant tub of water while it’s freezing outside.

The biggest cost of making the wort chiller was the cost of the 25 feet of pipe. All told, it came in at about $48, divided over four people.

We took a carlo rossi jug and wrapped the copper coil around it. We put the rubber tubing over the top of both ends of the copper tubing and fastened and tightened them with fasteners. We then put a swivel barb hose adapter at one end. Fastened it. Voila!

How cool is that!

You can do it too! Check out the pictures.

And make sure NOT to crimp the copper tubing. 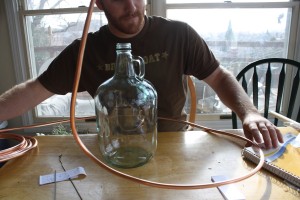 Uncoiling the copper pipe so we can recoil it. 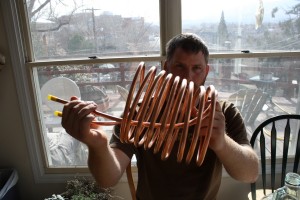 The chiller once it’s been wrapped around the Rossi jug. Next up: attaching the tubing. 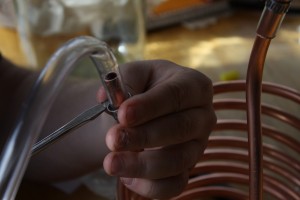 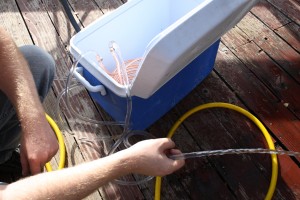 Clearing out the pipes.