Ostensibly, this is a blog about more than just food. About life! The food part of this post is about the taco dog: A hot dog with avocado, Tapatio and . . . Why not some cilantro? Honestly, I’ve yet to hear an argument against it. The other part is about my quest to read two books every three days, adjusted for length, or 200 pages a day.

I was off to a good start: I was really into Stefan Zweig‘s “Beware of Pity.” A good injection of drama into my otherwise ho-hum life. (I find there to be a very strong argument for soap operas, myself being a former subscriber to “Sturm der Liebe.”) It was like Downtown Abbey, with more Hamlet awkwardness and soliloquies thrown in. I’m currently being slowed by the often prose-poem of “The Hamlet” by Faulkner. But more on that later. 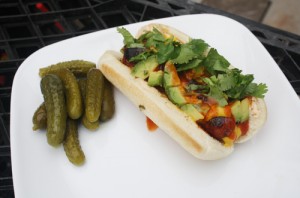 I had cilantro in the refrigerator. So I said, why not put some cilantro on it! Well, I exclaimed it. Didn’t really say it. Then, I realized I had those pickles. Those free pickles which therefore taste better.

On to food, before I return to books! I bought a whole bunch of hot dogs, while they were on sale, for a party I was having. I’ve been slowly using the ones that remain to eke out a frugal existence. When I still had a can of sauerkraut, I used it. Now, I have a few extra avocados (five for a dollar) and the two can go together. Mix in some Tapatio hot sauce and some secret sauce (as used on fish tacos.) Some mustard and a dab of ketchup and there. A quick, frugal meal.

I started out by warming up a bun and cooking up a hot dog, either on the grill or in the pan. Then, I cut up half an avocado. Dog in the bun, mustard and secret sauce on top or in the bun, avocado on top, followed by the Tapatio.

While you’re at it, look and see if you have any cilantro and if you find some, why not put some cilantro on it?

Then it was Truman Capote‘s “The Grass Harp,” which is really more of a novella than a novel. That was a one-day read. Then came John Steinbeck’s “Travels with Charley,” which was a decent read. It did not seem dated; much of what he writes about, despite it being dated to when he went across the country, is still true today. Not the best of Steinbeck, but worth the read to me. Great interludes on the hospitality of strangers, which would connect with the next book I read. It also was an interesting look at the emerging trailer park and manufactured home.

To follow one travelogue on the heels of the other, I read “The Places In Between” by Rory Stewart, another travelogue. Except this was even more of a diary than Steinbeck. It had been given to me by a friend as a birthday present and so I plowed through the whole book. In the end, I felt it fell flat. The Places In Between failed to fill in the places in between, in favor of a pure recounting of a walk across Afghanistan. The only thing I came away feeling was, I need to hold a higher standard of hospitality in my home and my heart. As to being a “flat-out masterpiece” as the book cover quotes the New York Times Book Review, I think not.

Following up Rory Stewart came Pierre Boulle with “The Bridge Over the River Kwai.” Not sure how I feel about it, but, it was a quick, one-day read. Work ethic, people, work ethic.

Following up that came Neil Gaiman’s Neverwhere, a book well worth reading for fellow Gaiman fans. Following him came Albert Camus’ “The Stranger.” Yet another quickie, clocking in at 123 pages. I put it away in a day. Then, I started on Faulkner’s “The Hamlet,” which I’m still slugging through.