This review was originally posted on Goodreads.com and reviews.wheelerc.org on Dec. 27, 2014.

Gary Krist’s Empire of Sin imagines itself to be far greater than it is and focuses on seemingly key players in a ploy to garner the reader’s attention at the price of a more complete history.

Empire of Sin is a quick read that focuses its gaze at the police in New Orleans and those who ran the brothels, especially Tom Anderson.

While the scope, set out in the book’s title, is grand, it falls far short of any of its stated goals, focusing on prostitution and the temperance movements while mentioning, but not truly delving into, the racial segregation that appears, from his book, to be the most powerful force that shaped in New Orleans has become.

That is not to write, Krist ignores segregation. He does not. He alludes to it and writes openly about it, but not in any length like he does the exploits and machinations of the white police force and the white brothel and property owners in the vice district of New Orleans. 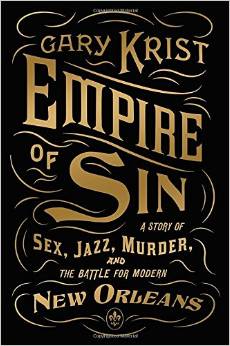 Further, when he does write about segregation, the writer finds that it is likely a much more powerful force than it is given credit for, and the racist players who brought about a less diverse and more boring New Orleans are not given the credit, or pages, for the amount of carnage they managed to create.

Krist’s short history of New Orleans also focuses on the Axeman murders, which he professes in his afterword, he thinks were likely far fewer than normally believed and, in his opinion, more boring. He also focuses on Louis Armstrong. While these are both interesting in of themselves, it seems they are not the best guides to lead us down the road of the shaping of the modern New Orleans.

This lack of focus, with its scatter-shot beams of focus on large players who undoubtedly have entire libraries devoted to them, detracts from the book, which ultimately does not deliver much more than a merest scratch on the time period of New Orleans it is aiming to illuminate.

The last point I take serious umbrage with is the use of quotations in the book. Sometimes, so-and-so was quoted in the Times-Picayune. (The only newspaper given the time of day in the book, although, it appears Krist was absolutely infatuated with its reporters and editorial writers for how much ink, prestige, time and snide comments he gives it.)

Other times, he attributes news accounts. However, I take issue with the uneven attribution of the source material. (There are neither footnotes nor endnotes). While I would have liked footnotes to know who he was quoting when, I would have found in-narrative reference fine, or even endnotes. As is, while Krist does write out his notes and bibliography, it takes a lot of effort to break out of the narrative and peck through the end of the book to evaluate his sources and source material. It’s not consistent. At all.

Review – The UnDelightened by Bentz Deyo