This review was originally posted on Goodreads.com and reviews.wheelerc.org on March 17, 2014.

The Anatomy lesson is a poorly-written and bloated novel, nothing but a slog of a let-down.

Its pedigree is promising: six years spent in Amsterdam, a former New York Times writer, rave reviews from fellow authors and an MFA. Pedigree, in this instance, has no claim on the quality of the novel, of the writing, of the novel’s coherence or anything else.

Whole sections of the book are nothing but useless bloat and should have been cut.

“Most excellent and ornate men of Amsterdam: Honorable Burgomaster Bicker, Amsterdam burghers, gentlemen of the Stadtholder’s court, magistrates, inspectors Collegii Medici, physicians, barber-surgeons, apothecaries, apprentices, and public visitors to our chamber, on behalf of the Amsterdam Surgeon’s Guild, it is my greatest honor to welcome you all to the Amsterdam theatrum anatomicum on this, the opening night of the winter festival 1632.”

That claptrap goes on and on and on. For 13 pages. Thirteen pages of pure, pointless claptrap.

The plot is, the lead up to Rembrandt painting The Anatomy Lesson. That’s it. So, really, there is no plot. There is no middle and there is no end. There is no conclusion to most of the story lines.

The publishers touts at least seven narrators, none of whom are given enough time to develop into characters. It is unclear at best, purely bad writing at worst, whom the narrators are speaking to, especially as the narration goes from first to third persons. Then the narration goes from past tense to present tense to past tense. Then one of the characters is flying over the city, trying to atone for his minor sins. Because that belongs in a historical fiction novel.

More pointless complaints, that should have been cut, but are left in, so this review will more resemble the structure of the book

I criticize those who come from other professions to writing for their terrible prose. While The Anatomy Lesson is just a little more polished than the average self-published claptrap, it’s only slightly so. Really, one expects much more of a main-stream author, a widely-read and published journalist. 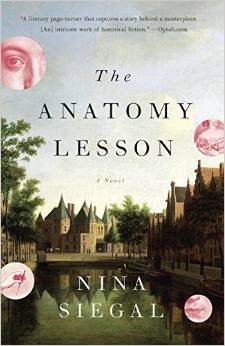 For some reason, only one of the narrators narrates in (an extremely annoying) dialect, mostly marked with the use of “were” instead of “was” as well as “them” instead of “those.”

The narrator is a lower-class woman from a small town, carrying the child of the cadaver to be dissected in The Anatomy Lesson. The man who was the cadaver, however, doesn’t speak in the same dialect, no, he speaks and narrates just like all of the other characters.

Half the time, the narrators appear to be narrating to someone corporeal, a magistrate, a friend, someone. The other half the time, it appears they are just narrating the story.

This is sloppy and makes no sense. Where was the editor?

The descriptions are sloppy.

Let’s just lay it out. The whole book smacks of slop and weak writing.

Worse, many of the scenes do not appear to have any actual purpose. If they do, they are bloated well beyond what they should be and drag on and on and on.

Kind of like this review. See what I did? Tailored the review to more resemble the book. Bam!

Too, the narratives switch between present and past tenses. I personally find it always more enjoyable when the author sticks with a single tense. But no! Too fancy.

Part of the problem with the book is in the lack of a plot. The plot is thin, as laid out above, and does not get more complicated. This wouldn’t be an issue if there were strong writing coupled with some kind of point, but both of those things are lacking. The book seems to wallow in the mediocrity of “literary” publishing.

The take-away
I wanted to like this book. I was prepared for a boring but well-written novel. That, I can deal with. This, this was a pointless slog through some kind of half-frozen swamp filled with swamp-clowns and swamp-hillbillies and alligators with big red noses.

Avoid this novel at all costs, because the editors who should have been doing their jobs did.

Hopefully, going past her sophomore novel, the author can write a more coherent tale. A more compelling tale. A tale that uses good descriptions, is well organized and in which every scene has a point.

This book was received, free of charge, through the Goodreads First Read program.
All quotes are taken from a bound galley copy of the book and may not represent the commercial text.

Review – Happily Ever After by Elizabeth Maxwell

Review – Astonish Me by Maggie Shipstead