Samaritan, the first Richard Price book I’ve read, reminded me why reading can be so enjoyable. Plotting, pace, dialogue, characters, it’s all brilliant here. Easy to look over are the beautiful turns of phrase.

I will admit, at the end, the morality starts beginning to feel less like a revelation after the fifth or sixth time and more like hammer banging on an already flush nail.

But really, Samaritan is a fantastic novel in the semi-hard-boiled style, worth reading for the language as well as the stories. 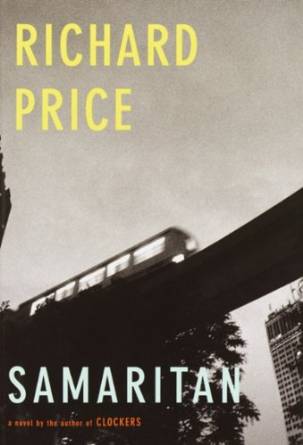 The characters! They seemingly pop off the page. The motivations are entirely thought through. To one extent, it feels almost like a work of non-fiction with how fleshed out everything and everyone is.

Which is a good portion of Samaritans: stories. Little stories, big stories, stories about growing up and stories about being grown up and stories passed down through families.
Much of the book (I do not consider this a bad thing) is the retelling of these familial stories.
So, here are some of those quotes mentioned above:

“The lack of eye contact combined with the furtive urgency of their touch shrank the enormous night into a stolen pocket of dark.”

“But rather than provoking her to walk out in despair on Ray and his stonewalling ways, as she studied his assault-marbled face, his gape-mouthed exhalations, she now felt desperate to work this last case successfully, desperate for the potential of grace offered by this last clearance.”

“In contrast to the rest of the projects, Big Playground was full to capacity, the chain-link fences that lined the perimeter hung with dozens of almost identical North Face puffy coats, like a rack of nylon pelts.”

Sometimes it isn’t the prose, but rather, the ideas.

“The quiet way she said it, with the smallest pause beforehand, told him that she was utterly alive to the drama, that what was going down here was probably a tome-honored routine, a ritual between husband and wife involving crime, punishment, purge and forgiveness, and that he was merely a player, a disposable second banana – that, in fact, his disposal was most likely critical to the climax.”

After reading Samaritans, I promptly jumped online and bought a few more of his books. Alas, he is not a prolific writer. I will have to make do with a small bibliography.

Review – The Broom of the System by David Foster Wallace