First, let’s deal with the reason Hillerman should be denounced by all journalists, for his duties as a shill. 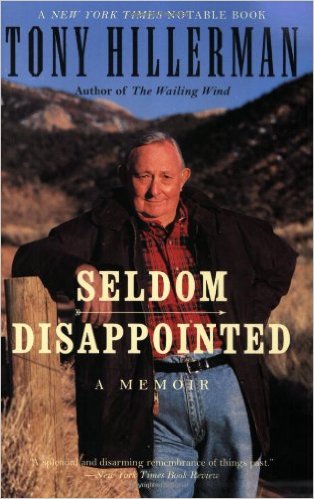 Hillerman got tired of being a reporter (he claims to be a journalist but it does not appear he was a journalist for particularly long and I write appear because he is so terrible with actually putting dates in his memoir, making it near impossible to know when anything is happening or create timelines) and moved to the position of flak at University of New Mexico or, as its current professors call it. University of Nothing Much.

While there, his boss tells him that a local sheriff, who runs a jail, needs 11 new mattresses after a prisoner insurrection, and he wants to keep it on the down low. Hillerman gets him the mattresses and he’s off to the moral corruption Olympics and already ready to turn in his journalism credentials.

Let us be very clear: Hillerman participated in, facilitated and was part of a cover-up and likely furthering the abuse of prisoners by an elected official.

Don’t take my word for it. Here’s the Merriam-Webster definition: “a usually concerted effort to keep an illegal or unethical act or situation from being made public.”
Hillerman writes the Sandoval County sheriff had some prisoners who were “acting up.”

I guess when all of your freedoms have been taken away from you, you’re no longer entitled to civil rights. You’re just dirty scum, Hillerman thinks.

“He had no budget to replace them and he didn’t want to alert the press to this affair,” Hillerman wrote.

Too bad Hillerman wasn’t asked to break into a political rival’s psychiatrist’s office to steal documents. That kind of behavior is right up his alley.

This isn’t the only time Hillerman decides to take ethics, morality, and other people’s lives into his own hands.

While working at the university, he hung up on bomb threats and reported them to no one. Because that’s a totally safe thing to do. He also made sure he had “deniability” because lying to the public is just the coolest thing ever.

But wait! There’s more! He also helped free a student suspected of killing another human being while in Ecuador so he and three other students could flee to the United States and avoid prosecution and keep it all out of the press.

He also looks down at genres that aren’t mainline fiction or mystery, because, you know, mystery isn’t a genre that’s totally looked down on, or anything.

Specifically, fantasy and romance? You might as well not be writing. Totally worthless.

Thanks for your elitism, Hillerman! Really makes me want to read more of your elitist stuff.

He later goes on to put down action thriller bestsellers. This man, he knows what is good and it’s only the genres he likes.

Moving on, he is just a boring and terrible writer. Everything is told, and frankly, he’s not that interesting. Maybe if you’re a super fan you’ll like his book. If not, don’t give this elitist (who doesn’t like elitists) any more money. He deserves not a cent, and in fact, deserves to be dressed down and never referred to as a journalist again.

Review – Among the Thugs by Bill Buford