Last December (2015), I flew to Bangkok, Thailand, for a two and a half week vacation.

I read a fair amount about what I should do beforehand but there was still a fair amount I learned while in country, and things I wished I had either done before, brought with me or what I wish I could have known.

This list is not made in any sort of order of importance and these posts will be put one on top of the other until the list is complete at which point, I will compile the big list in one post.

I learned that lesson the hard way when, halfway through my trip, I left my debit card (my one and only) in an ATM in Bangkok.

My problem was not that it was stolen, or used somewhere else. It wasn’t. My problem was that debit card was my only source of cash. Yes, I had an international (that is, no foreign transaction fees) credit card but getting cash from a credit card is a very expensive proposition and it’s not the easiest thing in the world. In fact, when I tried to do it, I was stymied by paperwork that I didn’t have.

I personally bank with Bank of America. I can now attest their international support is abyssal at best.

After trying to call their international collect line to no avail, I was finally able to get through in a browser messenger. The first person was dealing with was helpful, until the computer crashed. The second person I dealt with was half as competent and was unable to pull up any of the previous chat logs.

In the end, BofA supposedly sent my new card to some island in Thailand. It never arrived. UPS did not deliver it because they needed a better address and BofA never told me anything about the new card.

I was lucky enough to get the help of a Scot who took out the equivalent of $500 while we were at the secondary airport in Bangkok. (He was going to Chang Mai and I was heading to Phuket).

(Tip: There are no ATMs beyond the security checkpoint at the Don Muang airport, which serves domestic traffic).

I also learned that PayPal is worthless overseas. Despite multiple tickets, attempts, etc. to get PayPal to allow me to transfer that $500 to that Scot, nothing worked. In the end, I had to have an American relative wire the Scot the $500.

Have multiple debit cards attached to multiple checking accounts. Lose one? No sweat! You’ve got two more. That’s my plan for my next international vacation.

An adjunct to this lesson is to have a checking account with a bank that does not charge for either a certain amount of ATM fees or charges no ATM fees (that is, ATM fees are reimbursed). In doing my research, I found two options: The Charles Schwab Bank (investor checking account, which must be opened in conjunction with a brokerage account that you don’t have to fund or use) and Fidelity Bank. 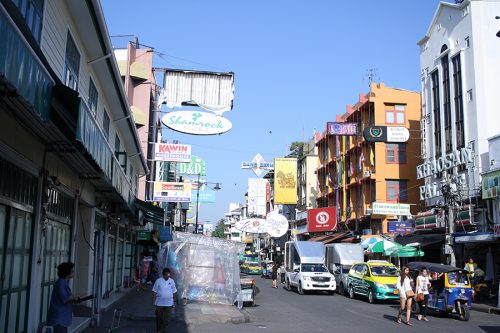 Vendors (center) set up their booths on the street on Dec. 4, 2015 in Bangkok, Thailand. Since most transactions are cash, get a debit card that doesn’t charge ATM fees, or reimburses you. Also, have multiple debit cards, in case you lose one.

Lesson 2 for Southeast Asia Traveling: Get a SIM card from a telephone vendor ASAP