Sometimes, great things come from the lowly grill at your local gas station.

That is the case with the corned beef hash burrito, originally hailing from the Triple S gas station in Española.

Uniquely New Mexican and a delicious fusion, there is nothing quite like it.

I was first introduced to this fusion by a co-worker who announced to the newsroom that he was going to get one at the gas station.

Soon, I went to discover this invention myself. I can vouch: it’s amazing.

Here in New Mexico, you will always be asked if you want red, green, or nothing. This refers to green chile and red chile. If you want both, it’s called Christmas.

This version leaves the chile choices up to you. I decided to chop up and lightly cook a green chile for the burrito. Normally I would have paired it with salsa and the secret sauce I use for grilled corn and fish tacos, but I was out of both.

There are quite a few moving parts to this recipe.

First, the corned beef hash. I used the canned kind because I haven’t made corned beef in a while. If I had, the hash is pretty easy to make. Finely dice everything (cabbage, potatoes, corned beef) and throw it in the skillet to fry up.

Either way, it fries in the skillet.

Next are the diced potatoes, which are optional.

The electric pressure cooker makes steaming/boiling potatoes so much easier than if I had to cook them in a pot on the stove.

Meanwhile, I had a little under a pound of black beans soaking in water since the day before. The morning I wanted to make the corned beef hash, dumped the water the beans had been soaking in, put them in the electric pressure with a bullion cube and let them cook for 15 minutes on high pressure. 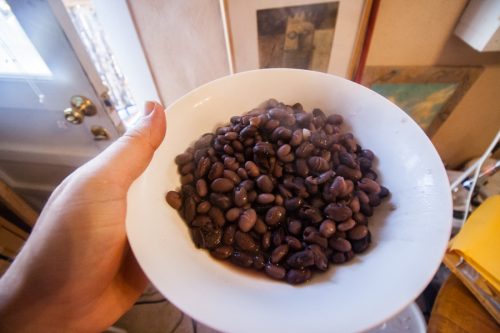 The black beans, after they’ve been cooked in the electric pressure cooker, and before they’re thrown in the skillet to lose any extra liquid.

Lots of people say you can just throw dry beans in the pressure cooker, it just takes more time. I prefer to soak the beans.

You might think this means the beans are done in 15 minutes. It doesn’t. It’s much closer to an hour, between the time it takes to heat the pot and bring it to pressure, as well as the time it takes to naturally release the pressure. Still, an hour without any babysitting the pot isn’t bad.

The corned beef hash (front) and potatoes (back).

Next up is the green chile. Chop it up and throw it in a hot skillet for a few minutes.

In hindsight, I probably should have added some eggs, either fried and on top of the burrito, and cooked and put inside the burrito, but I didn’t think of it at the time.

When it comes to the burrito, it needs to be large enough to allow for all of the ingredients. Often, packages will state “burrito size.”

So, go make yourself a corned beef hash burrito! You will be amazed at how delicious it is. 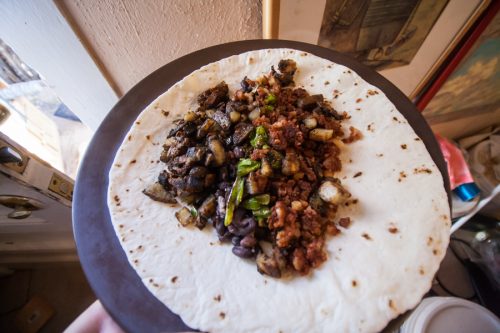 Find the rest of the photos here on Flickr. 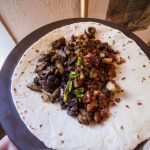 Lesson 23 for Southeast Asia Traveling: Have your Viber and WhatsApp accounts already created