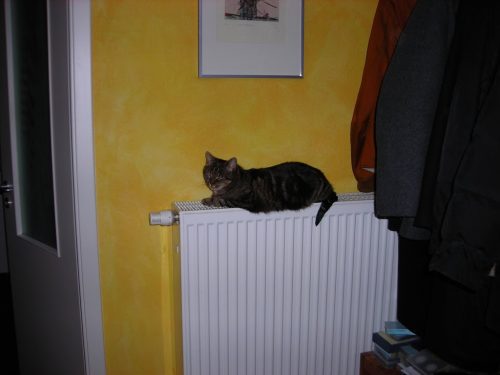 Note: This post originally ran on my blog from many years ago, wheeleringermany.blogspot.com. I posted to and updated it during some of my tenure as an au pair in Dresden, Germany.
It’s hard to believe.

The people here are proud of their state, their city and their people. Kind of like Nevadans.

The cat, (in the top picture, who I and the family call Katzu, pronounced more like Katza) and I presume most cats here, sleeps on the radiator. This radiator is the predominant heating system found in both homes and businesses and civic buildings. There’s a knob on the going from five, the hottest setting, downward. 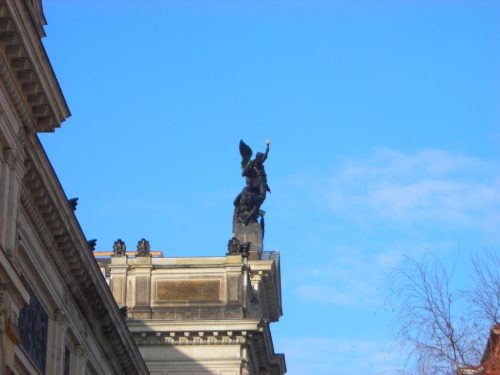 The people here seem, and this is with 12 full days and counting, to be very deeply, profoundly, spiritually and civically affected by two things:

The Russian occupation of East Germany, which they refer to as the time during the GDR, or the German Democratic Republic 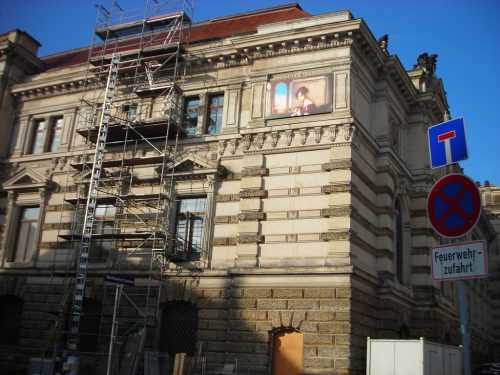 inventors, painters, tinkerers, founders and funders. I love moving to a foreign country that has a deep and rich history, the contemporary history just as enthralling as the centuries before, a first world country and one of the most powerful in the world, and only knowing about the Italian Renaissance, nothing more about Europe. Thanks for not teaching me about the Russian occupation or the dissolution of the USSR. I love America!)

The firebombing of Dresden

The Germans, especially the Dresdeners, were and are deeply hurt by the firebombing.

It’s not a sore. The firebombing got deep into their psyche. Their city was, the for most part destroyed. As may be seen in some of the pictures attached, or glossed over, is that the city was firebombed.

The statues and buildings standing after the bombing really show it. Their black. The sandstone of most of the buildings is black as charcoal.

Few buildings or statues survived the bombing. Few people, too.

I went with Andre (with an accent over the e I can’t reproduce on an American keyboard,) to the panoramic showing of Dresden before the seven year war with the Prussians, in 1773 or so. Or 1783. Somewhere in there.

When we were driving back home from the panorama display we took the scenic route. He pointed out new-ish looking housing building after building. “Constructed in the 60s” he said.

The new, fancy rebuilt church that tourists flock to? Opened mere years ago after it was rebuilt. It collapsed days after the bombing.

The firebombing really got to the Dresdeners. It still gets them.

I have lots more to say. Volumes! I’ve written six letters by hand, this online and one email and it’s not even close to the amount of writing that I still need to do.

Here’s a link to the Picasa web album of my first trip alone into Old Town Dresden.

It’s my third our fourth visit to the old town.

There’s so much we could do!

That being said, my host family still loves their cars. Nothing wrong with loving cars. I love cars.

“We need to go to the butcher down the street.”
“Let’s drive and then try very hard to find a parking place!”

I’ve done the impossible here. I’ve driven on the Autobahn. With a six-speed manual wagon Renault, none the less. The Renault is a French car. By no means bad. Could use some good old fashioned four wheel drive though for the snow.

The snow here sticks. It stays. It gets on the streets and never leaves. It means getting your car unstuck one out of five times. It means sliding on the street.
It’s very good for teaching one to come to peace with the fact you’re sliding.

The German streets are a little insane. But, they make sense.

That being said, German drivers are impatient and can be really crazy. Just as crazy and stupid as American drivers.

That person going too slow through town? Well, because German roads, depending, let you, pass them! On the two lane road! Like it’s the middle of some deserted Nevada valley!

Those stereotypes about Germans being quiet people? That’s a up and up lie. Just a lie. A dirty, dirty lie. Germans are boisterous and fun-loving and full of life.

Germany has taught me many things in my 12 days here. One of them is that I love meat paste. Just love the stuff. So do the Germans! On toast for breakfast, on toast for lunch, on toast for dinner, it works any time. And, it’s delicious.

My host family is great. I think I my luck wheel, landed on perfect, and negated any chances for luck for the next 50 years. The house is great, the parents are great, although they have moments, the relatives I’ve met are great, and the son (my charge) is very smart. If not motivated. It’s a challenge! Along with learning German. A challenge in which I must succeed, and find new and novel ways to.

Hopefully it’s not too late. At least, that’s what everyone tells me.

Here I go, I try to write small, and I write a story for the New Yorker, as Andre just told me. (I’ve been typing away while the German equivalent of CSI runs.)

Below is a link to the web album. Captions on a couple. I’ll try to take more pictures when I get a chance and the time.

I start German classes on the 26th, accompanied by an hour tram ride. I’ll be studying at the VHS, the adult college. Of which I cannot pronounce or spell the name.

Just a few more little tidbits: Little league soccer tournaments can have their moments. these 15 minute moments, or 30 second moments, are diluted by the 6 hours spent at them. I go to support

Ferdi, the boy. I go because that’s what an Au Pair who cares does. He goes to the games. But six hours? Pushes it a little.

Some of the wines here are, frankly, incredible.

Also, the whole being able to drink and not be 21 thing is nice. For once I find myself being treated like an adult. What a novel concept!

The flip side of the drinking coin is dripping in vomit, spilled alcohol and a little blood. On the tram home there was a group of five or six high schoolers, with open containers, drinking away and acting like all drunk high schoolers do.

Open containers are perfectly acceptable, even on the tram.

The system has its problems. But, the 21 and up system has many more.

Even better, Germany, I’m told, has a problem of welfare (equivalent) for the kids who don’t have jobs or still go to school but instead drink and take drugs.

And, they broke the higher ed system.

Poor college kids. But, their college is free.

I explained how much my tuition fees are at a dinner party with a family with two boys my age (at which I realized Europe and America have many of the same archetypes and stereotypes of people, young and old. Good little eye opener.) and the family was, quite frankly, aghast. At my in state tuition. In dollars.

That’s all for now. Here’s the much promised web album link:
http://picasaweb.google.com/wheeleringermany/DresdenOldTown#