Adapted from: Rebekah in Germany

Note: This recipe is a work in progress

I invited my former Volkshochschule classmates to the house for dinner on Saturday night. The family was out for the weekend; I had the entire place to myself. Only Ingrid, a classmate from Columbia, replied. She brought her husband and son along.

We started out with a beef stew made with a ¾ to ¼ red wine to water base. As a side I’d roasted Kohlrabi. However, in trying to keep them warm I managed to burn most of them to a crisp. Note to self: don’t leave Kohlrabi in the oven while baking anything else. Also, I learned NOT to use sea salt on roasted kohlrabi. The sea salt adds too much saltiness in too little space. Ingrid’s husband seemed to like them though; we had an entire conversation revolving around Kohlrabi. It’s a cousin of the turnip. I’ll write its recipe later.

I also picked up .40 Euro cents garlic bread baguettes. Quite delicious by themselves and go great with the beef stew.

After the stew we moved on to a “Bavarian Apple Torte,” which did not turn out as planned, and brownies coupled with the subject of this recipe: a syrupy wine-fruit sauce. As I wrote, brownies. Gotta love ‘em.

The definition of a perfect brownie changes from person to person. To me, perfect is on the just-cooked, fudgy side; the cake side is reserved for cake. However, this recipe is not for brownies. It’s for a sour, sucker-slapping syrupy fruit-wine sauce that goes with, on or next to a brownie.

The wine to use changes with the fruit. Peaches and nectarines go well with a white wine, possibly with a splash of red. Strawberries and raspberries go better with a red wine, possibly with a splash of white. But, ultimately, the cook should make the decision on wine-and-fruit paring. I’m no wine authority. It doesn’t hurt to remember that red wine usually goes great with chocolate. However, a glass accompanying dessert is probably better than putting peaches in a red wine sauce.

Wine, wine, wine. Wine is a beautiful thing. And wine is an inexpensive thing here in Germany. I find myself using it all the time when I cook now. The not-very-good tasting wines are downright cheap. They’re close to the price of organic milk, if not cheaper in some cases.

I used terrible-for-drinking (and downright cheap) boxed wine for the sauce. Not space-bag boxed wine but honest-to-god, wine in a box. Much like milk comes in a 1-liter container, so does crappy wine. It cost under a euro. 9.5% alcohol content.

The sugary taste of the sauce gets both chopped down and spiked with the lime. I’m very much a chocolate and fruit person, so this recipe is love to me. The sour, with the wine, really brings a new taste to the brownie.

My personal favorite matching is raspberries with anything chocolate. When I made this with nectarines and juice of about ½ a lemon it contrasted beautifully with the sweetness of the brownie. Ingrid’s husband and I were in love with the combination. Ingrid and her son didn’t like the sauce because of the sour. I loved the sour. The recipe and pairing are, alas, not for everyone.

The recipe calls for boiling or cooking/reducing the wine to about half of where it was. One can reduce it more, or less. The alcohol taste was gone from the sauce when I called it quits on reducing.

I’ve yet to work on presentation. You’re on your own for that.

This recipe/concept came (to me) from a fellow expat who’s living on an Army base here. In a previous life she cooked professionally. We’re in good hands.

Juice from ½ a lime or lemon

In either a deep sauce pan or a small pot add 2 cups of chosen wine. Bring to a boil, mix in the desired amount of sugar until its dissolved and half the fruit. Boil or cook/reduce the sauce until it’s about half the amount it was before boiling. The previously strong (warm/hot) alcohol taste should be gone. Add the rest of the fruit and serve with the brownies or other dessert. 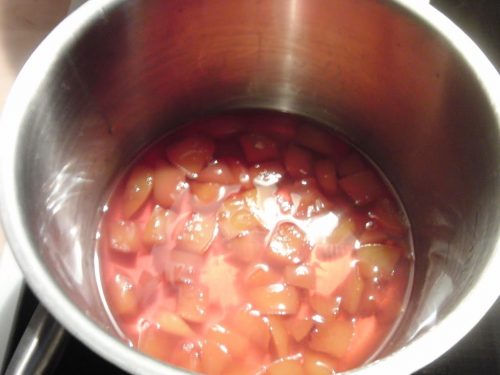 Profound questions about God — or, puberty

Poems on the wall