Thursday night, dinner. We were talking about Ferdinand’s confirmation classes. And Ferdinand professed that he doesn’t believe in God. He then asked me if I do. I answered no, I’m an atheist. Then the conversation devolved into Ferdinand denouncing a God who can allow bad things to happen in the world.

“I ran into the wall today trying to get the ball. God didn’t stop me from running into the wall and it really hurt,” he said. (I’m both cleaning up his English, because I forgot his exact diction.)

He then went on about how “everyone” says God is with them, or everywhere, or always helps, or some such, but God never helps him. (Never mind how self centered the view is.) Also, he says,

God never helps anyone. How could God (as opposed to a god, I think. Although I don’t think he understands enough to make that difference)allow all the suffering in the world if God is in fact God. And his pencil broke (as far as I understood.) And a god that exists wouldn’t allow his pencil to break.

Yes, his mom said. I made the choice for you.

Yes, your life’s so hard, Anja said. There’s so many other children out there whose lives are so many times more stressful all the time.

He then brings up that I don’t believe in God. Which means nothing in the context.

He muttered to himself about how unfair life and God are.(audible to us through the closed door. The his door opens into the upper-middle cavity of the room in which the dining room currently is. Half is entry way area, half is the dining room table and the rug it sits on.)

He opened the door, looked at me and said “Good night Wheeler.”

I said good night and he closed the door with the force of a child gripped by emotion. Or hormones. Or emotions caused by hormones.

“You didn’t say goodnight to me.”

He’s only 12 yet exhibiting symptoms of puberty in the context of an existential crisis.

I’ve always thought existential crisis come later on in life. Not for him. However, I think it’s merely a shallow existential crisis. Possibly caused by something going on at school. Involving the pencils, or possibly the pens. I’m not sure.

I stuffed a pork roast with dried fruits, apricots and prunes and the likes with a side of pears in wine and butter sauce and some wine gravy. The pork was mediocre at best. I think I overcooked it and put too much pepper in the rub. And, should have punctured the muscles to get more seasoning in the meat, not just on the outside.

I do like how the pork looked, however. To me, it is a yin and yang of apricots, possibly some other yellow dried fruit, and prunes. An omen of the dinner conversation? Maybe. 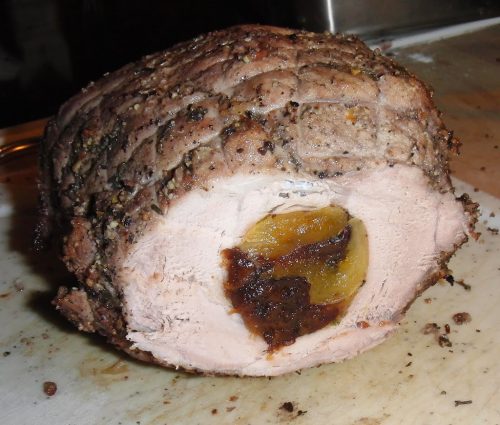