This article was originally posted on March 19, 2013 on my homebrew website, Fat Grey Tom’s Cider. It has been re-posted here with the same time stamp.

After many, many hours of work between the three of us, much hand-wringing over which items to buy and many, many trips to the store to figure out the correct-sized chest freezer, the kegerator, or keezer, is complete.

We’re running a four-tap system which means we have four Cornelius kegs jammed into the inside of the chest freezer. Bryce and Leo constructed a collar for the lid of the freezer to sit on, extending the height of the total unit. This was important because we invested in two 10-pound CO2 tanks with double regulators each. These sit on the hump of the compressor and allow us to interdependently control the level of CO2 going into each keg. Our cider keg is set at a much higher pressure than the rest.

The entire system is a dream and amazing for hosting parties, so long as no one bumps into the taps which, in a cramped space such as mine, is a real issue. We’ve yet to tackle the issue of a drip tray. At the moment, the drip tray could also be called a scrap towel folded and sitting beneath the taps.

Our next project, as the cider keg nears running dry, is to ferment five 4-gallon batches of cider with different yeasts so we can just start putting them in the keg once the past batch has been drunk. This also leaves the option of mixing finished ciders open and allows us to try a series of different yeasts we have but have not yet used.

The hope is, if one of the ciders doesn’t turn out, we’ll be able to mix it with one of the others.

All in call, I suggest a 4-keg system with a collar. At least, that’s what worked for us. Although the financial output at the outset is hefty — very hefty — it’s worth it. 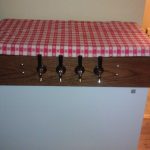 The completed kegerator, or keezer, with a table cloth.

An Experiment in Cider Yeasts