This article was originally posted on March 25, 2013 on my homebrew website, Fat Grey Tom’s Cider. It has been re-posted here with the same time stamp.

One of our local homebrew stores was having a sale on yeasts a month, or maybe longer, ago. The yeasts were about to go out of date so they were marked down and low and behold, they were not many common yeasts. In fact, they were all White Labs vials, four of them to be exact. So, I figured if we didn’t use them immediately for beers, we could also use them in a ciders before they went and and see what happened and then wash the yeast, and reuse it when we’re ready to make X, Y or Z with them.

Our recipe is as follows:

I also had a White Labs English Cider Yeast that had been sitting in my refrigerator for even longer but was still well within date.

I took industrial bleach and soaked all of the buckets, which had been sitting our for quite some time, and then soaked an additional bucket, which had somehow had its insides covered in algae  Industrial bleach kills all. We washed them out a bunch of times, put iodophor water in and off to the races we went. First, though, we had to drill holes for bucket lids and sanitize them, as well as sanitize the lids.

So, I picked up 20 gallons and cider with the intention of using the gallons for the soon-not-so-great yeasts. Fortunately, we still had four 4-gallon buckets laying around as well as a 5-gallon. We hatched the plan, for five 4-gallon batches of cider, thus consuming the 20 gallons purchased and consuming the five vials of yeast hanging out in the refrigerator. Our calculations were a bit off: We forgot that, in addition to the sugar’s boiled water, a 4-gallon bucket can’t really take four gallons without spilling out the top. Nevertheless, we soldiered one, made our cider sheets, labeled the tops of the buckets (important, because we hadn’t been doing that as often, leading to a case of unknown-yeast cider in the keg, also remedied by the cider sheets) and put them in the spare room.

Our theory is: if they taste great, we keg them. If one doesn’t taste great, this is a super opportunity to try to start mixing ciders and seeing if we can create something tastier, especially because five different ones have all been started at the same time.

I can happily report they’re all fermenting and pressurized.

“AW #?”
At this point, we really don’t know what batch we’re on and they’re their own, seperate thing, although they are using the Apfelwein (AW) sugar ratio.

Check back in a month! 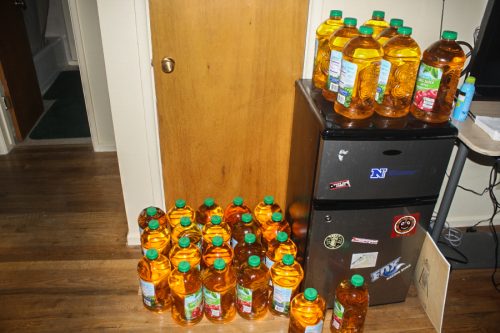 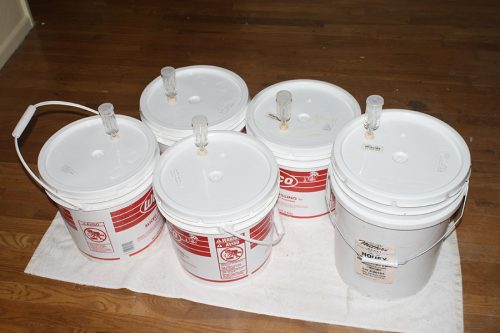 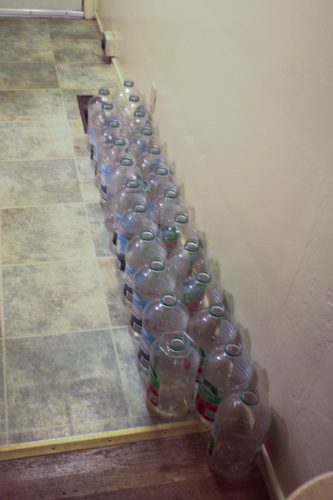