The cops and courts reporter I replaced at the Rio Grande SUN, as our style has it, moved on to North Dakota. With seemingly all that free time, he’s started writing again. He’s The Feral Scribe (www.theferalscribe.com) and his is a site I read when its updated, which is, as of late, often.

He writes what I strive to write here and elsewhere when I’m not on work time: observations, dispatches, anecdotes, a meaningful log of life, thrumming with a little bit of power, of the human experience, of something greater than itself.

I do try to reign myself in, reign my expectations in. Each web property I have, whether it’s Fat Grey Tom’s Cider, Cooking with Wheeler or Wheeler C. Photography,  has its own purpose. Brewing, cooking column with cooking videos, photography portfolio. Even this blog has its own purpose: spillover. No greatness: striven for or attained. It’s a blog, after all, not articles or dispatches or meditations. Often, it is a spillway from my life. Other times, a spillover from my cooking. A log. Sometimes more.

Sadly, pen pals can only absorb so much of the human experience, when there’s more to express, more to tell. I try to use pen pals to bear some of the force of the human experience, to use that chance to connect and describe the world around. Alas, even one reliable pen pal is never enough. Two, three, four, reliable pen pals. That is enough. Maybe.

Which brings me to something The Feral Scribe had told me about: hitchhikers. Pick them up, he said. Often, they would drop stories on him as he ferried men and women to and fro, a legitimate form of transportation here.

When I lived in Reno, I rarely saw hitchhikers and if I did, I usually spotted them long after I could safely stop, pull into the right lane, or I wasn’t going anywhere, just to another part of town to get groceries. Even if I were in the right lane spotted them, going slow enough and with enough room for one, two three people, rarely would there be a net progress or movement to an ingress or egress. There would be no point for them to get a ride.

Even here, I’m usually not paying enough attention to pick up hitchhikers or worse, my front seat and foot well are covered in stuff. Paperwork. New New Mexico title to my car. (When I registered my car, New Mexico made my surrender my Nevada title and printed me a new New Mexico one.) I don’t have a New Mexico driver’s license, nor will I possibly ever get one. (Due to ridiculous identification requirements that are neither clear nor enforced. Nor will the main-office DMV reply to a query I sent using their contact us system, which means it may be time to put the reporter hat on and do some digging. That’s a story for another day.)

Back to hitchhikers: I was driving back from Santa Fe and lo-and-behold there was a hitchhiker on the side of Santa Fe Bypass. Older white man, glasses, peeling skin from sunburn, wearing a very used sweater with a hiking backpack and a bedroll rolled up on top. Wearing a beanie, red-orange hair coming to a few inches above his shoulders and his green used sweater. Not the look of a hippie. The look of an old hitchhiker, maybe an old bum, living out of his pack, roughing it.

It’s hot out there.

He complemented me on my car. Asked me if I made my way towards Española or Taos.

Yes, I said. I live in Española and that’s where I’m headed. Where would you like me to take you there? We discussed the various different casinos and he asked finally to be dropped off at the one at the end of town, the Ohkay Owingeh casino.  I asked where he was going.

I asked a few more questions. He did not seem to want to talk, although he enjoyed the air conditioning just fine. I feared by asking too much, prying too much, I would break some kind of code. That he be a secret, and I be a secret, that we hold ourselves separate, apart, that knowledge is power.

I drove in silence.

Taos, you know, it’s really the Taos Pueblo. Possibly the oldest town in all of America. From here? Lived here long? Had a chance to get to Taos yet?

No, not yet. I’m from Nevada. Been here since the beginning of July. You? You from here?

No, from east and west of the great lakes. Used to have a head of 80 cattle but now I’m in the southwest.

Have anything waiting for you in Taos? Is that your destination or are you going somewhere else?

I have a project waiting for me up there. Lots of artist types.

I probed no more.

You know who owns this land? He gestured to the right of us, pinyon and juniper land.

If it were forest service, it’d be marked as such. Maybe it’s BLM land or maybe its private.

I could see why people wouldn’t pick him up — something he’d been having trouble with, he said.

He’s white. He’s older with unkempt hair, reddish, all the worse. The sunburn, the peeling skin, the big glasses that say, I come from the era of the Vietnam War. Reminded me of Bryan Cranston of Breaking Bad, if Cranston had let himself go to pot, grown out his hair and beard, started wearing a old beanie and a grubby sweatshirt, been out in the sun every day of summer without shielding.

Santa Fe is rich. I don’t see hitchhikers in Santa Fe. I see them in Española, in Chimayó. There, it’s accepted. Santa Fe? Doubtful.

Maybe all older white men with those glasses look like that. Just maybe.

He fell asleep in the car ride a few times. I said nothing, no radio, continued the drive.

He wanted to get to the casino by 6:10 to catch a bus to Taos, but, we were nowhere near that trajectory so he settled on the Walmart instead.

Do you think you’l be able to hitchhike up to Taos tonight? I asked.

Why are you asking?

No, it’s too late, I won’t have enough daylight. I’ll get provisions at Walmart.

I wanted to invite him to my humble new abode, the one with the three new paintings.  I wanted to say hey, are you hungry? Come to my place and have a hot meal. I have pinto beans that are either cooked just right or have turned to mush, since I left them on high in the slow cooker all day and they were on low all night. (The second cooking was not intentional, although they turned out fine.)

I wanted to say, come break bread with me. It’d be my honor to have you over as a guest.

But I’m not there yet. I’m not yet up to the inviting grubby older strangers, passing through, older men or women, into my home. Can’t trust anyone over 30, right? Or is it 20 . . .

I still have a bit of the fear. If I had a roommate, I would have invited him in. If I had that security blanket of a second person, I would have said, come, break bread with us. Have a glass of wine with us. But no. Alone, I am not there yet, and I feel slightly ashamed for it.

At least I cleaned out my front seat this morning. There wasn’t a 10-minute scramble of stuffing paperwork into the back seats.

After I dropped him off, (Liam? he said. I’m terrible at hearing names. All names. Any name. And as a journalist, no less.) I saw another lady hitchhiking as I was coming back the other way. But I was in the left lane and passing as I spotted her. Alas, my eyes aren’t yet peeled enough.

I thought I’d drop a picture here of hitchhiking in Romania, more of which are featured in this nostalgic post. 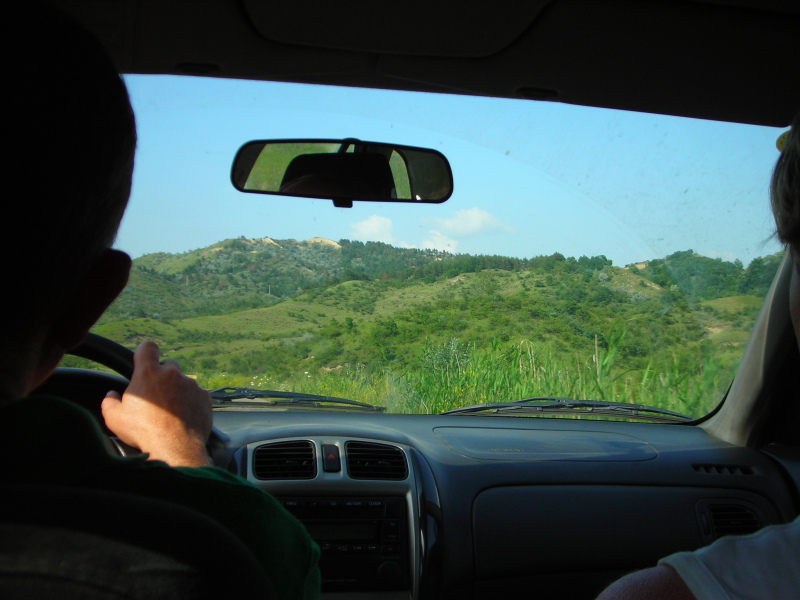 The man who picked us up and spoke none of our accumulated 6-7 languages.He permanently restored my faith in humanity.

And now, some clouds in La Puebla.

Sunlight and clouds in La Puebla.