A recent The Atlantic article took on the concepts of “You Only Live Once” or “YOLO” in popular culture, specifically, pop music, in very contemporary terms, along with “Live fast, die young.”

I was driving and the M.I.A. song “Y.A.L.A.” — short for “you always live again” came on the radio. Only hours before, I had (uncritically) read Sottile’s essay on dying young  in popular music.

I posit that “YOLO,” only living once, and life fast, die young are two entirely separate, although related, concepts and are, by no means, yet another indicator that today’s youth and pop culture are on a suicidal slide.

Only living once, rather than being a banner for living so hard that one incurs an early death, is actually a call, and a reflection in our larger society for, a change in how we behave. Only living once means that individuals only have one chance at this life: there is no afterlife to look forward to, nor is there another chance to look towards.

YOLO is an existential and an atheistic theme, I think, reflective of greater changes in our culture. Rather than being the rallying cry for why one should not care about the future, YOLO is a reflection of why we should care: there is no other chance. The only chance for good we have, in fact, the only chance at all, is contained within a singular life. Rather than a call for hard living, and early leaving, it is a call for the cherishing of life.

I will admit, Ke$sha’s “Die Young” is an appeal to the live fast, die young ideal. However, Icona Pop’s “I love it” is not. Besides being a lyrically-empty song, the entire contents played within the first thirty seconds, the song does not call for young death, as Atlantic writer Sottile posits. Rather, it is a call for a loosening of inhibitions.

The acts “I love it” describes are as follows:

1. Crashing one’s own car into a bridge, followed by watching it burn. (Insurance money, anyone?)

The first instance is specific in its lust for life. The narrator crashes the car to watch it burn. There’s some lust of life to want to watch something burn.

The second instance is all about moving on, albeit, in a harsh way. The narrator attempts to eject a presumably close person (you) from her life. Rather being banner for a want to die young, it seems more like a theme of living life now, and planning for the future.

As childish as “YOLO” appears to be, it underlies a much deeper concept, that of human mortality in a context stripped of the niceties of religious beliefs.

I’m pretty sure I’m only going to live once, which means I certainly want to make the most of it. I’m pretty sure pop culture does too. Let’s just not confuse the concept of one life to live with dying young. 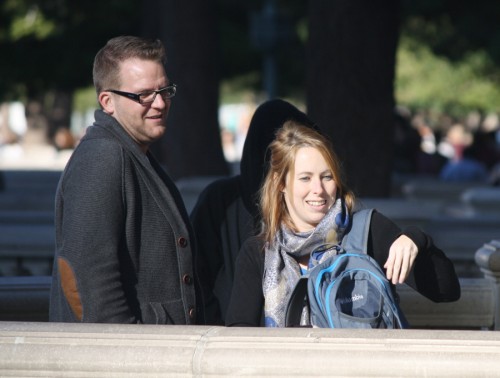 A couple in front of the Bellagio fountains on Black Friday, 2013. Full set, and the original, here on Flickr. Photo released/copyrighted under a Creative Commons 4.0, attribution-only license.