The concept is ripe for a novel: doctor uses his access to patients, and trends, in the emergency room to carry out a war on the male criminal elements in the big apple.

The inherent tension in the idea would, seemingly, be enough fodder for a brilliant story. After all, it’s about a doctor who hurts people, and then proceeds to treat the people he’s intentionally harmed. A doctor violating his oath.

Dr. Vigilante does not live up to the lofty concept. It lives up to the pretension of a rich, hunky doctor living in New York City, who is written as a toned-down version of Batman.

The pretension, along with the terrible stereotypes and blatant sexism built into the plot, into the characters, even into the setting, helps drive this book down, down, down. 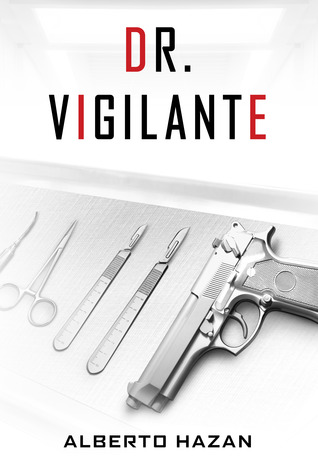 So, there’s the jerk doctor who’s smarter than everybody else, has been around the block and has enough free time to do research on the people he’s going to maim in his personal capacity as a vigilante. He’s Dr. Robert McKenzie. He drives a Ducati, he has a penthouse, he has a private garage, presumably in Manhattan. He fought against genocide in Columbia. His body is marked by the scars of the war, of his vigilante efforts and, most importantly, his childhood abuse.

Then there’s the super-smart social worker who moved from the rural town in the mid-west to the Big City, New York, and is not-really living her dream in the emergency room. But she’s super hot and Dr. McKenzie, aka, Dr. Vigilante of the book’s title, well, he’s totally into her. But he can’t get too close, because he’s the Vigilante!

And, two thirds of the way through, there are some neo-Nazis in Manhattan who are beating up the gays, the Hispanics and the Chinese late at night. I guess that’s supposed to be the over-arching plot development: a badly-organized hate group.

Too many steps too far
Details are great. Details make stories real. As a journalist, I live for little details. The details in this book might, to the author, tell all the right things. To any of the readers who do not come from multi-million dollar families, the details become pretentious.

Recently, I went with a co-worker to a county commission meeting. I was helping him learn the ropes and we had been assigned to cover a permit being requested for a woman who wanted to run an eight-to-12-dog shelter out of her house in semi-rural New Mexico. One of her neighbors spoke against the shelter. The neighbor mentioned an incredible detail, which both my co-worker and I picked up on instantly, as did the rest of the crowd. The neighbor said she feared for her $150,000 horses, that they might be attacked by the dogs. That is a telling detail.

Alas, the details in this book become one facet of what is tiresome about it.

The doctor drives his Ducati motorcycle at speeds in excess of 120 mph on New York City streets. (Not while being chased. Just because. As if that were possible.)

“He chose an all-black outfit and secured a SIG Saur P226 on his calf and a Glock 17 around his shoulder.”

Personally, not being a gun person, I have no idea what type of gun a P226 is. I know the manufacturer Glock, but a Glock 17? I have no idea, let alone what caliber of bullet it fires.

A .45-caliber six-shooter? That’s fine. A .45-caliber semi-automatic pistol? That’s fine too. I know what it is. It’s descriptive. But the brand name? Might as well mention the designer who made his all-black outfit. Did he buy it at Eddi Bauer? Or Cabela’s?

“You can’t go after that gang any more.” (Sharon, the social worker, to Robert McKenzie, the vigilante doctor.)
“I can’t sit back and allow them (neo-Nazi gang) to fill the ER with victims.”
“You can’t stop all the crime in the city, Robert! The problem’s too big, and you can’t pull out its roots with weapons and spy equipment” (sic)
“What roots?”
“Poverty, access to guns, crappy education, violence in the media, drugs—”
“Those aren’t the roots, Sharon. That’s the worst kind of sloppy liberal thinking I’ve ever heard.”
…
“All I’m saying is that you shouldn’t hold yourself personally accountable for getting rid of every wife beater and child molester in Manhattan.”

A hint of sexism
Writing of stereotypes, the premise and statistics pushed one little pet peeve of mine. The premise is, men are monsters. (A further premise is, only a man can stop the male monsters.)

Men are pedophiles. Men are rapists. Men are child-and-wife beaters.

When men are victims, it is because they are either gay, Hispanic, or Chinese.

(Neo-Nazis are proliferating in Manhattan. Oh no!)

This, and the men-are-the-only-perpetrators statistics, really bother me as someone who both knows better and who writes about crime for a living. I’m a cops and courts reporter in a small town and I can attest: domestic violence runs both ways. Sometimes she stabs him. Sometimes he stabs her. Sometimes she attempts to stab her son, his wife, and their children. Child abuse is (allegedly) perpetrated on children by abusers of both genders.

Men are even raped! (Catholic church scandals, or Penn State, anyone?) It’s ridiculous, I know, to try to break through the stereotypes and paradigms that make women the powerless victims and men the horrible aggressors. It’s easy that way. It’s a lot harder to write about the real violence in the communities, which does not discriminate between the sexes.

To be fair, as a child, Dr. Vigilante himself is sexually abused. But, this is done to him as a child, one of the two non-entities the author perpetuates in the book.
At the beginning of the book, the author, a doctor himself, quotes these statistics from the National Center on Domestic and Sexual Violence. Please, see if anything might be missing:

“A woman is assaulted every nine seconds in the United States
“Around the world, one in every three women is beaten or raped during her lifetime.
“Domestic violence is the leading cause of injury to women – more than car accidents, muggings, and other forms of trauma combined.
“Each day in the United States, more than three women are murdered by their husbands or boyfriends.”

If one were to point out these statistics single out women as victims, I think one would have a point. Although it certainly points out issues, it also creates them. It sets up a paradigm.
Women are the victims. Men are perpetrators and men are the saviors.

The protagonist, the doctor-slash-vigilante of the book’s title, is a man. He is the knight, and he wears armor and he saves his love interest, a social worker, from being raped by an angry drunk. If we were playing cliché bingo, I’m pretty sure we’d have a winner.

It’s a dangerous form of sexism and it cuts both ways.

Personally, I didn’t like the book, for many of the reasons listed above. Bad execution. Stock, one-dimensional characters, stereotyped characters. Hackneyed dialogue spewed by the aforementioned characters. Pretentious details. Boring plot and ridiculous love story.

This book was received, free of charge, through the Goodreads First Read program.