It was Friday, which meant the Hispanic grocery on Wells, Marketon, was having its one day sale. I looked at the ad and lo and behold, Swai was on sale. However, I had no idea what Swai is so I looked the confusion fish up.

The Iridescent shark (it’s not a shark) is actually a type of catfish (shark catfish, Wikipedia says.) It is, however, packaged as “swai.” Three names: iridescent shark, swai, and catfish. It’s a native to fresh water in southeast Asia.

Speaking of, which, one of its relatives, the Wels Catfish, is reported to jump out and eat pigeons. If only we had them in our fountains.

At $1.99/lb, I figured they must taste decent enough and if they’re anything like their North American cousins, the flesh should stand the test of the grill. So, I bought two packages, totaling 7.89 pounds. The fillets I bought were huge, the length of a small cookie sheet. I poured lemon juice on it, threw on some lemon pepper, pepper and garlic salt and let it sit for half an hour before throwing it on the grill.

The plain recipe is: here.

Before I started to prep the dinner’s fillet, I unwrapped the respective packages, brought out the plastic wrap and individually wrapped each fillet before putting them into a larger plastic bag, and then into the freezer. 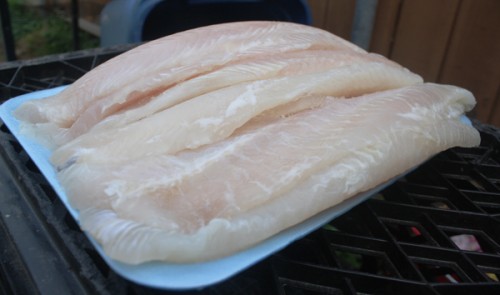 Pounds upon pounds of Swai fillets, which are the size of a small cookie sheet.

The iridescent shark fillet, as its known in its native habitat, cooked quite well on medium heat on the grill, about three minutes on each side. It did not fall apart when I flipped the huge fillet. The flesh was light and not terribly fishy. Just enough salt and lemon: bam, it was delicious. I did, however, forget to put cilantro on the fish or on the rice. Live and learn. 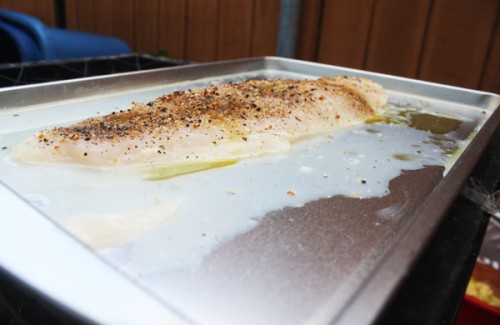 Swai fillet, the length of a smaller cookie sheet, sitting in lemon juice and olive oil with a covering of lemon pepper, pepper and a wee bit of salt.

Before I (lightly) marinated the swai on the cookie sheet, I had set the rice cooker to do its thing with a batch of brown jasmine rice. Once the ricer cooker clicked, I fired up the grill. I put a bit of lemon juice and a splash of olive oil in the rice cooker, as well.

In the meantime, I cut up a head of broccoli and put the cast iron skillet over medium-high heat and added a teaspoon of oil. Once the skillet was hot, I dumped in the broccoli, added a bit of lemon juice, and let it cook for a few minutes, just enough to be lightly browned on most of the florets. Meanwhile, I had set a timer and flipped the fish and dashed the other side with the left over lemon juice and olive oil, the lemon paper, a bit of garlic salt and some pepper. I closed the lid and let it finish.

Once the fish was done, after another three minutes, I took it off the grill, cut the fillet in half, reserved the other part for another day and plated: the brown rice, with a little bit of lemon juice and soy sauce, the fish and the broccoli. Voila. Delicious, healthy, cheap dinner for two. And, since I’m one, that means leftovers. 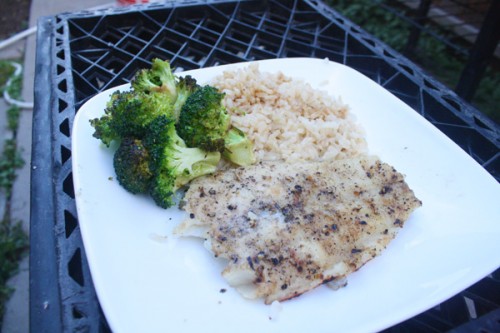 When it comes to grilling fish, I like them on the under-done side, so one may want to increase cooking time. 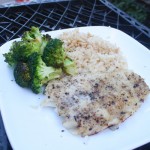 Notes on a south-east drive