Since I’ve been unfortunately bereft of cash, I’ve moved much of my diet over to the produce that’s on sale for the week and brown rice. Brown jasmine rice, to be exact. The other part of my diet is using up whatever I have in the refrigerator. Recently it has been small dill pickles.

Eating so much rice quickly (soon I will move on the quinoa and the bulgur wheat I have stored) means I have to mix up what I’m doing with the rice. Early in the month, I made a conglomeration of black beans (I had cooked in the slower cooker,) chorizo and brown rice with ample amounts of onions, (home-made) salsa and Taptio (not home made.) 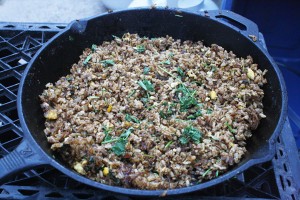 Curry rice with a wee bit of cilantro on top.

I then moved on to the stir-fry route with a failed General Tso’s chicken, made with broccoli. The sauce (made with apricot preserves) did not come out at all. (The point of the dish, to me, is the sauce, not the meat.) I considered it a failure. That left me with extra rice and no eggs. I didn’t want to just fry the rice — no eggs. Instead, I dug through the quickly-emptying refrigerator for my big container of yellow curry paste. Two pounds, to be exact, of spicy goodness. I poured some oil into the cast-iron skillet, put the curry in, let it disintegrate some and then threw in the rice. 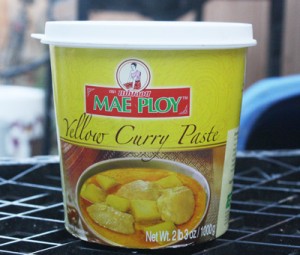 Had I other vegetables, or had I remembered the just-bought sack of onions sitting with the potatoes, I would have thrown them in. Good contenders range from potatoes to eggplant to broccoli and sprouts, peppers and tomatoes and squash. I then made a hole in the center of the rice, cracked for eggs, cooked and mixed them into the rice. I cut up cilantro I had bought for the purpose and threw it in, leaving a little extra to be used as a un-cooked garnish.

It serves its purpose. Now only, if I had vegetables left.

If you’re looking for a little extra somethin’-somethin’, then consider making some dill-heavy tzatziki to go with the curried rice.