This article was originally posted on March 29, 2013 on my homebrew website, Fat Grey Tom’s Cider. It has been re-posted here with the same time stamp.

Leo, Bryce and I are products of the late 80s and early 90s. When we were born has informed both our choices in diction and our nomenclature decisions, aka, references. The banality of evil is certainly, to a degree and extent, borne out of the History Channel of our childhood’s and its devotion to World War II. Certainly, the time I spent in Germany and my obsession with the German language and culture has influenced both our brewing and our terms, too.

Leo has said the three of us make up, through our various quirks and proclivities, interests and designs, gesticulations and interests, a single 1950s wife.

What this has to do with beer should certainly be explained: Leo wanted to make a domestic (American) golden ale. Not even a pale ale with its higher alcohol content, but rather, a domestic American beer. He made up the recipe extemporaneously at our local homebrew store. The beer was supposed to be a domestic. Together, we three brewing brothers, make up . . . domesticity itself. I’ve been told countless times I’d make a very good wife to some man some day, because of my love of cooking, of hosting, child-rearing, etc. Not to say I disagree. I don’t doubt I’d make a great housewife. I even love a good soap opera, albeit, in German, the language of true Liebe.

When it came to brewing Voltron, the three of us combined into . . .

We wrote the ingredients down and the process was the same as always, except we did not write the yeast down. We’ve assumed, through elimination and cross reference with the one-gallon cider batches fermenting in my closet, that the yeast was the Burton Ale Yeast from White Labs but we’re not sure. Maybe it’s the London Ale Yeast.

Regardless of which yeast it is, the beer itself (a truly beautiful amber color) has been infected. It’s not a bad infection, it’s a pleasant, sour infection but an infection none-the-less.

The beer is carbonated and kegged and has been quite a hit so far, although, it seems everything in the keg that doesn’t taste terrible is a hit.

The plan is to culture whatever we managed to create and both remake that recipe and also make something new. It’s a good infection, one we can harness into a whole new yeast strain and possibly bacteria strain through washing and culturing. Next up for that combination, we’re thinking, is something with fruit.
This is for a five-gallon batch. 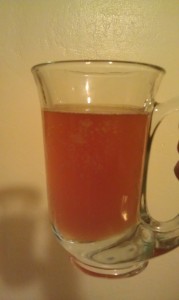 The Voltron in low light.

An Experiment in Cider Yeasts