“Death’s Acre” is not what it claims to be: “Inside the Legendary Forensic Lab the Body Farm Where the Dead Do Tell Tales.” 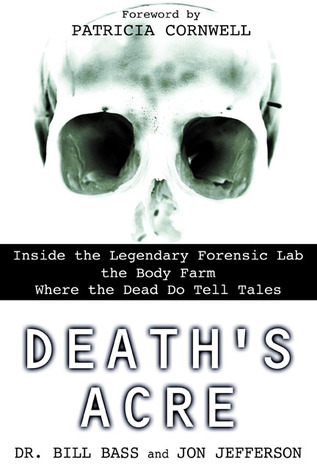 It’s also Bill Bass’s chance to stand up and accuse men and women, not convicted in a court of law, of being murderers. More on that later.

Bass writes about all sorts of things, including a few of his cases and cases of his colleagues. He writes a little about the “body farm” and its genesis, but, not that much.

He complains about journalists, the scoundrels, and then bemoans when newspapers (written by journalists) didn’t cover a murder, disappearance or found body he deemed newsworthy. A little bit of cake-and-eat-it-too going on.

As much as Bass might bemoan journalists, he could have done with a journalistic editor. He jumps around, across, over, under and through time without much, if any, concrete groundings, concrete dates, concrete years to orient the reader. There is no timeline and the memoir is not ordered chronologically.

Result: Confusing and bloated. Too much useless fluff opinion. Bass tries to be a philosopher, to make great, profound points at the end of his chapters. Really, life is short and brutish and no amount of sugared words will mask that fact.

As a journalist, on the cops and courts beat, I deal with this topic on a (literally) daily basis. I err on the side of writing about all the felony arrests in my county. I also try to make sure to write about the end of the case: a guilty plea, a dismissal, a not-guilty verdict, etc.

Bill Bass feels no need to throw allegedlys into his writing. Or, really, any indication that the people whom he believes to be guilty aren’t. They’re guilty, come hell or high water! And as a forensic pathologist, often writing about cases he was not even a part of, he knows best. Trust Bill, when he says someone is a murderer. It doesn’t ruin lives or reputations or anything.

Take the case of the murdered 18-year-old Lisa Ranker. Bass’ protégé, Bill Rodriguez, was working on the case and detectives thought they had their suspect based on circumstantial evidence, hearsay and a polygraph test.

“With no cause of death and nothing but circumstantial evidence to suggest that Lisa might have been murdered, though, the district attorney decided not to file criminal charges against either Bernie Woody or Danny Heath.”

Bass is on a first-name basis with “Danny,” whom he has accused of murdering or helping to murder Ranker. I mention his casual use of Heath’s last name because it marks a lack of respect and civility, especially for a man one openly and profusely accuses of murder in a mainstream publication.

So, Rodriguez (referred to, very poorly in style terms in this book, as Bill, despite the author’s own first name) finds Ranker’s bones show evidence of stab wounds. Her death gets re-classified as a homicide.

“Sadly, Lisa’s killer remains at large. Despite the skeletal proof Bill (Rodriguez) found showing that Lisa has been murdered, and despite the linger questions surrounding Bernie Woody and Danny Heath, the Fairfax County Commonwealth Attorney remains unwilling to prosecute the case.”

Woah there! Billy proved the woman had been stabbed, probably to death! Except there’s no evidence of who did it. Bass doesn’t care. Hang ‘em high! He says. Let God adjust the scales, right? Burn ‘em!

Anthropologists and insects can reveal the truth about a crime, but they can’t force the wheels of bureaucracy to turn, they can’t guarantee that justice will be done. All they can do is  serve as a voice for the victims, and hope that voice is heard.”’

Let’s be clear. A district attorney refusing to charge and attempt to prosecute a murder case for which he has no evidence is not a wheels of bureaucracy issue. It’s a: preventing other victims, falsely accused by anthropologists who are only out for blood, from being turned into victims issue.

(That quote was also one of Bass’s faux-philosophical chapter endings.)

And really, he’s giving voice to the dead victims, I guess, in hopes of making new, living ones. Kudos, Dr. Bill Bass. Kudos. Grade A life-ruining right there. Even as a journalist, I couldn’t have done a better job myself. And I’m accused of doing such on a monthly basis.

Mildly entertaining and bloated as the bodies he inspected, Bill Bass makes allegations of murder against unconvicted men and otherwise wastes time in this mislabeled memoir.