This review was originally posted on Goodreads.com and reviews.wheelerc.org on March 1, 2014.

Professor Kompressor gets visited by agents with an agency so secret, they refuse to name it. He makes a series of inventions, visits a foreign country, flies over a bunch of others, and makes a bunch of inventions.

Professor Kompressor under cover (sic) certainly has a little charm, but glaring errors take away from that charm. In short, the book either needed an editor or, a much better one. And a couple of proof-reads. (For the record, the professor is not under the covers, rather, he is undercover.) 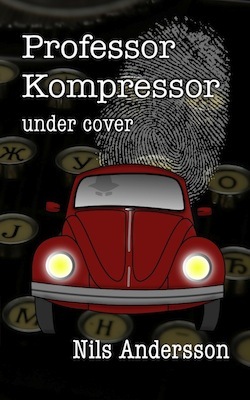 The biggest issue is the use of direct quotes. Most style books, and readers’ sanity, dictate the following: If a quote goes over a single paragraph, the end of the first paragraph, and all subsequent ones except for the last, do not have an ending quotation marks. Each quote encapsulated on both ends by quotation marks is supposed to mean the end of the quote: the next should be a different person’s quote.

“What are you doing with this battered old car, though?”
“Are you training to become a mechanic?”
“Doesn’t quite match your usual invention, does it? A bit too down to earth”

Because all this dialogue, in a row, is said by the same person, the quotation marks at the end of “though” and “mechanic should be left off, to mark it’s the same speaker. This lack style adherence makes the book much harder to read than it should be.

As a person who works in print, spacing issues equally struck me with chagrin. Indent-long spaces between words in the same sentence seemed like the paginator feel asleep at the keyboard.

When it comes to style, there is certainly too much redundancy. Most phrases of shock or surprise speak for themselves. The readers don’t need to be told someone says something hesitantly when the dialogue is clear on that point.

Clearly, with the over-use of ellipses (throughout the entire book) he said it hesitantly. That was the point of the “Uhm” and the ellipses, right?

Style issues aside, the book is certainly a jaunt and a quick read but, the adventures could contain more wallop: either morals, surrealism, character development or something, rather than just for the sake of showing off the professor’s latest invention. The premise of the book, the professor goes undercover, offers perfect fodder for some national security jabs, some humor, some irony.

An editor, a proofreader and a little bit stronger writing would go a long way.

I received this book, free of charge, through the Goodreads First Reads program.