This review was originally posted on Goodreads.com and reviews.wheelerc.org on April 4, 2014.

“Three Trips in Time and Space” is three novellas of wildly disparate quality by three different sci-fi stalwarts, commissioned on the idea of instantaneous, economical travel.

(Them are: Larry Niven with ‘Flash Crowd, John Brunner with ‘You’ll Take the High Road’ and Jack Vance with ‘Rumfuddle.’)

The Premise and the Challenge:
The jist of Silverberg’s foreword, his challenge to the authors is instantaneous, economical travel. His words:

“Suppose it were possible, technologically and economically, to transport oneself to any point on the earth’s surface in virtually instantaneous travel? What sort of society would develop where Arabia is an eye blink away from Brooklyn, where one can step from Calcutta to the Grand Canyon between two heartbeats? Let the author, if he can, visualize for us how such a transport system might work – but let him concern himself, primarily, with the effects it would have on the texture on quality of human life. (emphasis added)

There one has it. Instantaneous, economical travel.

The Quick Run Down
1. The first novella, ‘Flash Crowd’ by Larry Niven sets a very good tone. While it lacks in a denouement, it certainly hustles the plot along for most of the story. From a technology standpoint, both it and Brunner’s novella share a conceit of a form of teleportation.
2. The second novella, ‘You’ll Take the High Road’ by John Brunner neither hustles along nor is standable, most notable with its whiney narrator/main character.
3. The third novella, and the strongest by far, is ‘Rumfuddle’ by Jack Vance. Although it’s confusing for the first few pages, it quickly hits its stride and the strong-headed narrator is evened out by a strong plot, strong pacing, a great twist and a great technological concept that propels it far beyond the environs and implications of its two brother novellas.

’Flash Crowd’ by Larry Niven
Although it has a character after my own heart doing the thing my own heart craves (news reporting!) Flash Crowd fails to deliver after its middle. 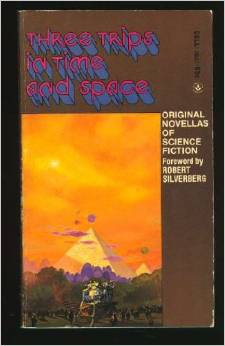 Once he’s blamed for an especially bad flash crowd (once a crowd starts throwing bricks in an effort to loot, it’s a riot, although no one knows against what), he must go be a reporter and find out what the root causes of the crowd are, of the riot are, to clear his own name.

Fair enough and it would have worked better as a short story, not blown up into a full novella at 85 pages.

’You’ll Take the High Road’ by John Brunner
Once again, teleportation, but with lots of added robots. And class issues, sort of. And travel issues. And law run amuck. And an annoying narrator who can’t stop whining, or say no.

There. You have it. Not worth a long short story, much less a novella.

’Rumfuddle’ by Jack Vance
Despite a confusing beginning (read the first 20 pages in one sitting, as I did not) ‘Rumfuddle’ brings the goods home.

Cognates! People have cognates. Alternative, nay, infinite worlds, and the problems this can create.

Although more issues could have been dealt with (messing with the timeline, yo), it’s a delicious novella none-the-less, delivering some great fat to chew long past the time it’s been read.

I’m not going to go on and on because, likely, you haven’t read it yet. Read it.

Review – Astonish Me by Maggie Shipstead

Review – The Ghosts of Nagasaki by Daniel Clausen