With that, I had three problems with LeDuff’s book, listed here and borne out in greater detail in their own subheads:
1. The race-orientation, as it were, is not clearly identified for each person when he/she is introduced. Sometimes it is. Sometimes it isn’t. It’s terribly important.
2. LeDuff does not follow through on, or follow, stories. (He appears to whisk himself away to the next scene.) There is a related, or sub point on this issue: While LeDuff holds many people accountable, to a degree, he complains about others but never explains why he never went after them.
3. LeDuff never writes down dates. I have no idea when most of the narrative, or things in general, are taking place. Is it 2000? 2010? November? July? Who knows. The one thing that grounds the reader in a narrative built around the progression of time is totally gone.

And:
4. LeDuff has a thing against prostitutes.

The race issue
Race is, I learned from LeDuff, a major issue in Detroit. LeDuff being white, it makes a certain level of tension depending on whom he’s talking to. But really, LeDuff makes lots of hay over race but only selectively chooses to identify that physical feature of each of the people he writes about. 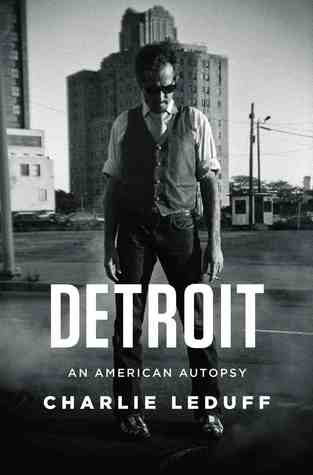 Take the example of Monica Conyers. She is, at the time, a city council member and married to a house rep. She at one point grabs LeDuff’s testicles and squeezes, to prove a point. She might be crazy. Her race? Who knows. LeDuff, I guess, assumes we know.

But we, who are not from Detroit, do not know. When LeDuff makes the point that the Fire Department is run by all black political appointees, he further codifies that the story of Detroit requires race be identified.

“’Jesus, it’s Whitey McWhiteville out here,’ my wife said distractedly, noticing a white-faced lawn jockey. My woman is a white girl who grew up in Detroit—not the suburbs—which makes her a special kind of white person.”

That’s on page 214. Would have been nice to know a little bit earlier, considering the wife if mentioned from the beginning of his book.

Or here, we do get positive identification of a photographer about to get beat down.

“Ricardo rolled his eyes. A sixty-seven-year-old black man, Ricardo had covered riots, murders and street protests in his long career. He knew the scene.”

That being written, LeDuff’s own look into his past adds a great layer of depth and personal connection to the issue that might not otherwise be there. A level of complexity.

“I was told there may have been some mixing of the races in a distant wing of my family, and ever LeDuff I had ever met was the color of caramel. But the fact that Grandpa himself was born black and died a white man blew me away. Not only did my blood track to the woodlands of the Great Lakes and the Celtic shores of France, but to the Gold Coast of Africa too. The African Diaspora and the Great Migration could be traced through my own family, and it was written on paper.
“I sat in my basement smoking cigarette and looking at an old sepia photograph of my great-grandmother I’d recently been given by a distant relative, wondering how the story of Detroit had come to this point, with me being the palest black man in Michigan.”

No follow-through
The Feds (FBI) run a sting operation, really a murder operation, on a thug calling himself a black Muslim.

“And as I sat there scribbling in my notebook, I wondered why the federal agents couldn’t simply have arrested the imam while he went to get a morning cup of coffee.”

LeDuff never follows up on the story, never tries to pry loose from the FBI why it had to go in, with guns blazing, and kill the man. To be fair, he was only at the Detroit News for two years before he moved on. Likely a Freedom of Information Act request with them, and the subsequent battle (for it is a battle) for documents would have likely lasted longer than his short tenure.

I would like to know why he never followed through.

In one instance, the instance that was the end of his time at the News, LeDuff tried to get a paper file from a judge who refused to come out. She wouldn’t. He wrote the story with the courts reporter (it seems like LeDuff judiciously stepped on what would seemingly be all the other reporters’ beats) and, when it finally ran in a watered down version, he called it quits.

He never sued, or tried to sue, to get the file. Never filed a judicial complaint. Nothing. Not to say something would have been done, but, it’s the thought that really counts.

Time, date, place
That’s AP style and something that gets drilled into me every time I mess it up. LeDuff, as shown below, will give us only a portion of the date and the place. Everything else? It must be that timeless America.

“It was a beautiful December morning in southern California. The 405 freeway was bumper to bumper, which was either a good or bad sign for the American car industry . . . It was the morning before the Los Angeles Auto Show officially kicked off, and Cadillac was holding a reporters-only preview of the CTS Coupe, the newest member of the Cadillac family, set to hit showrooms in 2010.”

His sister was a prostitute
So he seems to have a deep problem with sex workers.

Conclusion
Detroit is a fantastic mix of memoir and stories from Detroit, even if it could have used a few more details to ground it and a little more follow through with some of the stories.

LeDuff tried to make a change, and likely, he was at least partially successful. Just, no one cares about the status quo.