Glen Berger wants to make it look like he’s spilling all the beans about the botched musical Spiderman: Turn Off The Dark.

Really, he delivers allusions, innuendo and promises he never delivers on. Much like the production he also failed. 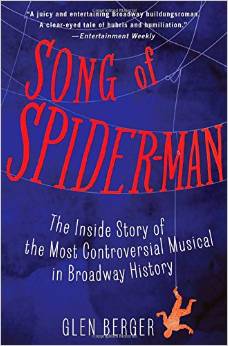 Look at the negative reviews for the book and one can glean what I think, more or less, about the book.

Here’s one major aspect I don’t think has yet been discussed: The platitudes and credit given to Julie Taymor  despite the wide gulf of differences between the production she’s given credit for, The Lion King, and the musical she was half-assedly trying to create, Spider-man.

Julie Taymor is widely hailed as being responsible for the success of the theater production of The Lion King. Masterful, if one believes Glen Berger.

(While I enjoyed seeing The Lion King, I do not think it was transcendent.)

So, that’s the crux of this entire story. Julie Taymor is amazing! because of The Lion King.

Here’s the thing that Berger, and seemingly everyone involved with the project, and every positive reviewer who is a fanboy or girl of Taymor, appears to miss:

The Lion King was Taymor’s adaptation of a movie (animated) musical.

Portraying Taymor as a god-like figure, just because she adapted (and took most of the songs from) an already created musical is already a license for failure.

The fact is, Taymor’s reputation, referred to throughout Berger’s book, was borne on the back of a musical adaptation of a musical.  Moreover, the narrative for Taymor was already written. The plot was already hammered out. There was already dialogue to steal.

Moreover, The Lion King itself is based on Hamlet and biblical tales. (Listen to the song, The Circle of Life and compare it Hamlet, Act 5, Scene 1, as well as Act 4, scene 3:

“ Your
worm is your only emperor for diet: we fat all
creatures else to fat us, and we fat ourselves for
maggots: your fat king and your lean beggar is but
variable service, two dishes, but to one table:
that’s the end.”)

The point is, The Lion King was based on other narratives and her Broadway musical is an adaption of another musical. This is a far, far, cry from making an original entry into the Spider-man cannon, which it appears Taymor wanted to do (without a seeming care for the existing cannon).

The point? Everyone was an idiot for giving Taymor credit she did not deserve.

Plus, the book is way too long. Berger writes he condensed it from some kind of door-stopping monstrosity. At 356 pages, it’s way too long.

Review – The Trouble with Gumballs by James Nelson

Review – The Witch of Painted Sorrows by M.J. Rose