M.J. Rose’s new novel, The Witch of Painted Sorrows, feels more like a very long draft of a novel rather than a fleshed-and-thought-out story. 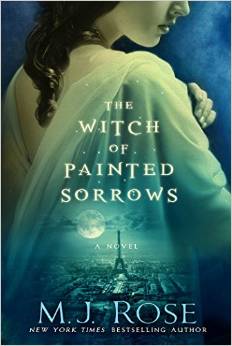 Furthermore, the plot elements introduced at the beginning to propel the main character to Paris, where the book takes place, feels haphazard at best and the very first draft at worst. Her husband is described as “dangerous.”

He is a killer! Except he’s not. The main character’s treatment of her husband, meant to be a plot point, appears more like she’s actually crazy because of the level of hysterical thoughts and feelings attributed to him.

“But I would not live with a brute who had my father’s blood on his hands.”
Hysterical.

Also, there’s a sleep rape scene perpetrated by the female main character against her male lover, which is portrayed as totally OK. Switch the genders and it would not be OK.

Sleep rape is not OK.

All in all, not worth reading.

Update on Jan. 26, 2015
The author, Ms. Rose, took to Facebook on Jan. 18 to complain about my review and defend the offending scene in the book, which I believe I have correctly described as sleep rape perpetrated by a female on a male. This can also be called made to penetrate.

The offending lines in my original review (above) (besides being negative in general) are as follows:

“Also, there’s a sleep rape scene which is portrayed as totally OK. Switch the genders and it would not be OK.
Sleep rape is not OK.”

As I wrote in the original post, my problem is the portrayal of sleep rape as acceptable, as the norm, or as Ms. Rose would have one believe, not possibly because the victim is a man and the perpetrator a woman.

Ms. Rose proceeded to defend the scene to her nearly 80,000 followers.

Many of those commenters wrote that I must be puritanical, prudish, that I confuse sleep rape for lovemaking or that I live in the 19th century.

“An early reviewer has blasted the book claiming I have a sleep rape scene. Ahem. In said scene Sandrine – a FEMALE – arouses her MALE lover while he is sleeping and they proceed to make love while he is half-asleep.”

Please observe what is wrong with Ms. Rose’s defense of the sleep rape scene: “a FEMALE – arouses her MALE lover while he is sleeping.”

Ms. Rose uses the argument that because a woman is doing the perpetrating, it’s obviously not rape.

Unfortunately, this is a wrong-headed and entirely false conceit. Neither rape nor consent know gender or gender roles.

She also uses the argument that what her main character does to her lover is acceptable because of their romantic relationship.

This would not be an acceptable argument if the gender roles were reversed. After all, marital rape has been illegal in all 50 states since 1993.

Below are three very good articles on the issue from three different publications:

Slate — When Men are Raped by Hanna Rosin
http://www.slate.com/articles/double_…
Choice quote: “By portraying sexual violence against men as aberrant, we prevent justice and compound the shame.”

Vocativ — The Hard Truth About Girl-on-Guy Rape by Elizabeth Kulze
http://www.vocativ.com/underworld/cri…
Choice quote: “Of course, for even the gentlest male sleep-rapist, ‘I assumed she’d be into it’ doesn’t exactly fly in court. Consent reigns supreme, and to pursue a female without it is to invite culpability. In
‘made to penetrate’ cases, the line is often far more ambiguous. Still, there are plenty of female aggressors who don’t leave much to interpretation.”

Pacific Standard — When Women Sexually Assault Men by Livia Gershon
http://www.psmag.com/politics-and-law…
Choice quote: “THE NOTION THAT SEXUAL assault of a man by a woman is impossible, and even laughable, rests on the same gendered assumptions that are also used to downplay assaults on women by men”