21. If using buses, protect your stuff if its raining

The first time it happened, I wasn’t angry. I was just sad. After a sleeper bus ride from Hoi An to Nha Trang, arriving at 6 a.m., I got my bag out of the bottom of the bus and found it was soaked. Not just soaked. Sopping wet. Still, I shouldered the bag, moved my smaller day pack to my chest, and trudged toward my hostel, soaking my shirt all the way through.

After getting a few more hours of sleep in one of the hostel’s empty dorm rooms, meant for travelers who don’t get to check in yet, I opened my backpack.

It was the worst possible scenario. All of my clothes in the bag were completely soaked. Not just a little. I could literally wring the water out of each piece of soaked clothing. Worse yet, two of my prime camera lenses had been wrapped in the same clothes. They appeared to be undamaged by the water, but I knew I was going to be staying in my dirty clothes until the following day, when I could pick up my cleaned and dried laundry.

Before I go any further, what should you do?

(Read the rest of the story after the jump.)

Finding my bag completely and totally soaked only came as a little surprise. When I left Hoi An, there had been torrential rains. I later learned that old town started flooding after I left, something that didn’t surprise me. Vietnam was hit by a tropical depression, bringing unseasonably heavy rain storms. 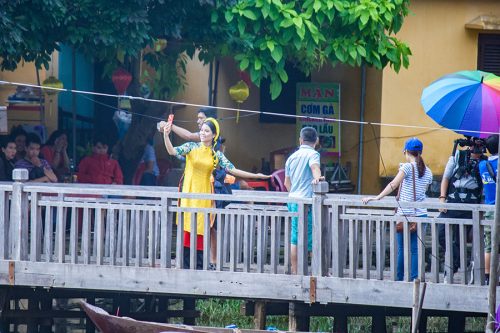 A woman in traditional dress takes a selfie in Hoi An, Vietnam, Dec. 13, 2016, while the man behind her does the same. To the right, a film crew conducts an interview beneath a colored umbrella. Hoi An was marked by sunshine followed by torrential rain, leading to flooding.

Still, finding the bag sopping wet while it was secured in what I presumed to be a somewhat safe place, the bottom of the bus, was a surprise.

Talking to other backpackers on the same bus, we surmised, based on direct observation and mud on our bags, that they had been taken out during one of the stops and likely put in the gutter, a de facto stream, while bags of rice were loaded into the bottom as well.

That would be more than enough, submersion that is, to cause the soaking of my clothes. Much to my dismay, I also found a library book, Southeast Asia on a Shoestring Budget, got soaked. I can only hope the library doesn’t make me buy them another.

When I got up, I loaded all my clothes into a plastic trash bag and handed them over to the hostel to be cleaned.

When I left Nha Trang for Mui Ne, (one Russian stronghold for another) I again took the night bus and again, it was raining. This time, the trip wasn’t nearly as long. Leaving at 4:30 p.m. (the bus was 20 minutes late), we arrived in Mui Ne at 12:30 a.m., about 30 minutes ahead of schedule. It was raining quite heavily when we left Nha Trang, and for quite some time afterward. 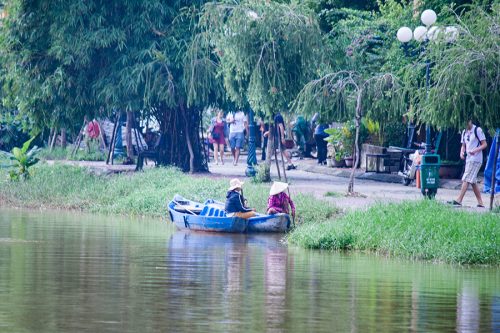 Two women try to entice tourists to ride their boats, Dec. 13, 2016 in Hoi An, Vietnam. While it was momentarily sunny, Hoi An was deluged by rain later in the day.

When I got my bag, this time, I was able to visibly see the underside of the bus, where all the big bags are stored. (On sleeper buses, there is no overhead compartment, so any bags you bring on board either go on empty seats, if there are any, in the aisle, or on you.)

It was soaking wet under the bus, with large, brown pools of water.

Again, my bag was very wet, although not quite to the sopping level it was the first time.

However, I learned from my mistake the first time and kept most off my clothes in plastic bags of one kind or another. Except for a little bit of wetness on one pair of shorts, peeping out of a plastic bag, most of my clothes were fine the morning after. Once I arrived at the hostel, I made sure to take everything out so the bag could dry.

I think there are two lessons here.

The first is, if it’s the rainy season, or unseasonably rainy, or if a tropical depression is making its way through or if you’re worried about heavy rains at all, put all your clothing in plastic bags in your backpack if you’re going to be traveling by bus.

If your bag does get soaked while its on the bus, or while the bus personnel throw it into the streaming gutter while they load rice, it won’t matter more than just a little because all of your clothing will be safely protected by plastic.

After I had all my clothes washed in Nha Trang, I left almost all of them in the plastic bag they came back to me in, but did not cover the top, where I opened it. I should have double bagged it.

The second lesson is, if there are heavy rains, go buy a rain cover for your bag, but make sure to bring the bag with you (and full, to boot), so you can get the exact right size. I would do this even if you don’t plan on using the bus.

I used the bargaining tactic (see lesson 22 on haggling) of saying my friend had bought hers in Hanoi for 80,000, when vendors tried to charge me 300,000 or more. Although it may have been a tactic, it was absolutely true. I walked away from (and was not chased after by) a few vendors until I finally found someone willing to sell it to me for the 80k.

My friend also told me she was able to buy a rain jacket or slicker for 120,000 Dong ($5.27). I tried to negotiate some vendors down on rain slickers, but that was just not happening in Hoi An, where they wanted to charge me US prices for counterfeit North Face goods.

You might need to buy a rain cover for your big backpack as well as your day pack, if that’s how you roll. 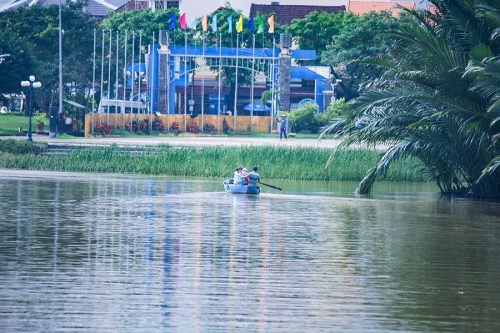 Tourists are ferried on the river, Dec. 13, 2016 in Hoi An, Vietnam, during a period of sun. Rain, rain, more rain, marked the weather later that day.

Lesson 20 for Southeast Asia Traveling: Take other travelers’awesome evaluations of tours with salt

In praise of Tzatziki, aka, yogurt sauce