20. Take other travelers’awesome evaluations of tours with salt

Maybe this doesn’t apply if you’re not talking to backpackers, I don’t know. Staying in dorms, that’s who I always ran in to.

Here’s the thing: it seems like most travelers want to be positive, nay, they want to be having the time of their lives and they can’t be having that once-in-a-lifetime experience if they admit that anything they did was less than amazing.

That means when it comes to the tours, either set up through your hotel, hostel or done through a travel agent, people often want the tour to have been fantastic, even if it wasn’t, to keep up the idea that they had a great time. That means often, you can’t trust their evaluation.

My example is Halong Bay, during my 2016 Vietnam trip, which I will write up in a later post. It’s supposed to be amazing! One of the best things in Vietnam, with the limestone islands and whatnot, dotting the sea.

Two guys I met in Hanoi had just been there, and done their tour through the hostel. Another couple had done the same. Get the tour! they said. That couple, two Americans, were doing the 6-month honeymoon through Southeast Asia. They wanted for experience to be amazing, reality be damned.

Later on, I talked to a French couple who have been traveling for a long time. They told me, instead, go to Cat Ba Island (slightly different name, basically the same place), rent a scooter, hang out for a day, scope out day tours, and do that the next day.

I decided the risk of the pair being right was outweighed by the ease of the tour through the hostel, as well as my limited time in country. 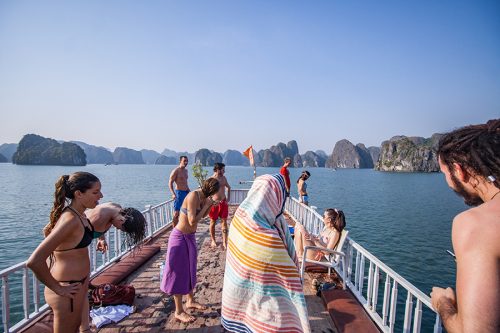 A German (right) cheers on an Argentine woman about to jump off of the top of the boat, Dec. 9, 2016, in Halong Bay, Vietnam. The limestone cliffs and palisades and the like can be seen in the background. The tour was described by others as being the best thing during their entire vacations. Taken on Dec. 9, 2016.

I was wrong, for the two pairs of backpackers raving about the trip had deceived me. It was not as they described, and it was not awesome.

So, what’s the lesson? When you get really positive feedback about a tour, especially when people are still in country, take it with a heaping grain of salt, and if there’s conflicting testimony, believe the cynics over the optimists.

I’m not alone in this thinking. A fellow writer I met, also in Hanoi, confirmed much of my same suspicion in an email, after I advised her of how my own trip went how the rave reviews turned out not to be true.

She described it as, everyone wants to be having the time of their lives so they can’t say anything to break that gentle facade.

Listen to the criticism carefully, and weigh it strongly against the applause.

Next is an impression from my 2015 trip to Thailand. There, I met up with a few solo travelers and one couple. Together, we went on an overnight tour which was fun in of itself. We spent the night, along with a bunch of poles and Danes (I was the only native English speaker) on floating huts, and did some trekking. 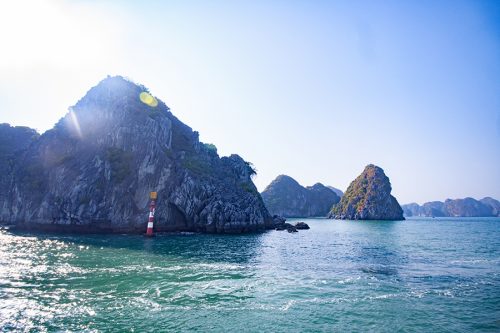 These very small islands are what Halong and Cat Ba bays are all about, and why Lonely Planet lists it so highly in its guide book. Taken on Dec. 9, 2016.

A breaking point came when I pointed out to one of the solo travelers, a Belgian lawyer who just turned 30, that were were not actually traveling on a lake but rather, on a reservoir, and that far from being a natural phenomenon, the Thais had flooded the valley to create the body of water we were on.

She told me I was being far too negative, so I then kept all of those thoughts to myself.

At the very end of the tour, as we were all packing up and getting ready to move on to our various next destinations she said, and I paraphrase, “Man, wasn’t our tour guide just terrible?”

That led to an hour-long conversation about how our guide was just terrible.

I agreed that he was, but I didn’t want to say anything, for fear of being overly negative.

The sub-lesson here is, before really saying anything negative, gauge your audience. Some people, you can speak truthfully to. Most, it would be ill advised to do anything that could shake their rose-tinted facade. 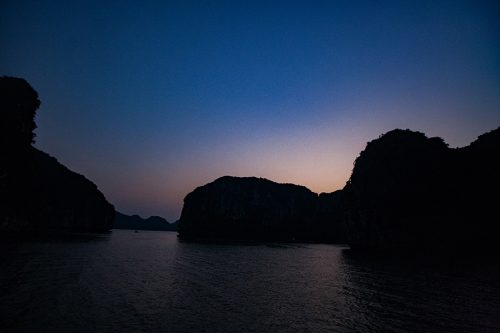 My new wide angle lens doesn’t do low light (because the apeture doesn’t stop down to 3.5) which makes sunset photography hard, especially when I brought no prime lens with me on the trip. Taken on Dec. 9, 2016.

Lesson 19 for Southeast Asia Traveling: Your feet are going to swell

Lesson 21 for Southeast Asia Traveling: If using buses, protect your stuff if its raining