Summertime, and the living is hot, which means cooking indoors is a pain. There is a solution. The grill.

I love grills for a multitudes of reasons. They can be quick, they are outdoors, they are tasty and easy and, in the summer, cooking inside is far too miserable.

That’s where a new take on grilled chicken comes in. Specifically, it is a Thai take on the humble hunk of chicken meat.

Gai yang, also called kai yang or ping gai, or simply Thai grilled chicken, brings together some of the most prominent flavors in the west: lime, cilantro, garlic and chiles. 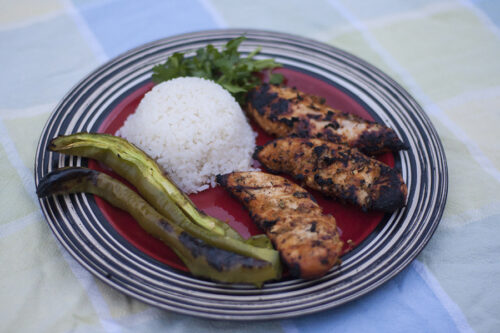 The flavors mix, meld and create something worth adding to the regular stable of meat marinades.

I was lucky enough to, most recently, take a return trip to Thailand just on the cusp of the current pandemic. That meant tourism was down and the streets were not nearly as packed as I have seen them in travels past. Although there were fewer people, there were still plenty of street food vendors with small grills and bags of marinating meat.

Many of the grilled foods had two common ingredients: lime and chiles. There is a third ingredient, which smells awful, but really adds a savory, or unami taste: fish sauce. I swear by it in most marinades, where it adds a saltiness and depth of flavor not offered by soy sauce.

It’s an ingredient that is in lots of Thai cuisine but its influence melds into the background, becoming indistinguishable on the palate, except for a sparkle.

Really, gai yang is not that different from a regular citrus marinade, with the exception of fish sauce: cilantro, garlic, lemon and lime.

The original marinade recipe I used as a base calls for chopped lemongrass and cilantro roots. I know finding cilantro with the root still on his hit or miss, and lemongrass is hard to find, so I’ve substituted lemon rind.

Making the marinade requires a good processor or blender and the chicken should sit for at least three hours, if not overnight.

I serve this chicken with some green chiles roasted on the grill and rice. 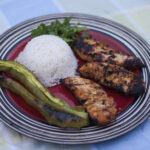 In Memoriam of Tweaks