Cooler winter days cry out for a change in menu, for something that stays hot during the whole meal, that feels like the enveloping warmth of a dinner lit by a fireplace and candles.

Now is the perfect time to break out the cognac, slice some French bread (or sourdough), get out the little tureens and impress family, friends, or a date, with perhaps the most romantic soup: the French onion.

Like so many French recipes, this will involve bread and cheese, butter and onions, cognac and time. Some of the time will be spent attentively watching onions as they slowly brown in butter, but the majority of the time can be spent away from the stove as the soup simmers, and simmers, and then simmers some more.

French onion soup starts not with onions, or French bread, or nice cheese, but with stock, which builds the base everything else is built on. There are many strongly held beliefs on the stock that should form the base of the French onion soup.

Still others say store bought beef broth will do, even the low sodium kinds, or even chicken broth, although if you have a turkey carcass still being covered, consider turning it into stock. Still some say skip the animals and go straight to vegetable broth.

Bon Appétit’s Chris Morocco goes so far, in his “French-ish Onion Soup” to get rid of stock altogether, instead letting the namesake of French onion soup to do all the work.

This recipe is a bit of a hybrid. I’ve pulled from a few different sources, including Morocco, Julia Child and Petit Trois, the French bistro in Los Angeles and Sherman Oaks. (They’re the ones who call for six pounds of veal neck bones.)

This recipe comes in a few parts. You can serve the soup with toasted French bread (or sourdough) on the bottom, on the top or float it on the top, cover it in cheese and bake it in the oven. You take it up a notch with an egg yolk, Worcestershire sauce and some extra cognac for a deluxe soup.

This recipe can easily be vegan, by omitting the cheese, using vegetable broth and using olive oil instead of butter, or just vegetarian, with the use of vegetable broth.

One final note: French onion soup takes time. There are no shortcuts and there is no cheating. You can’t increase the heat on the stove to make the onions brown faster. 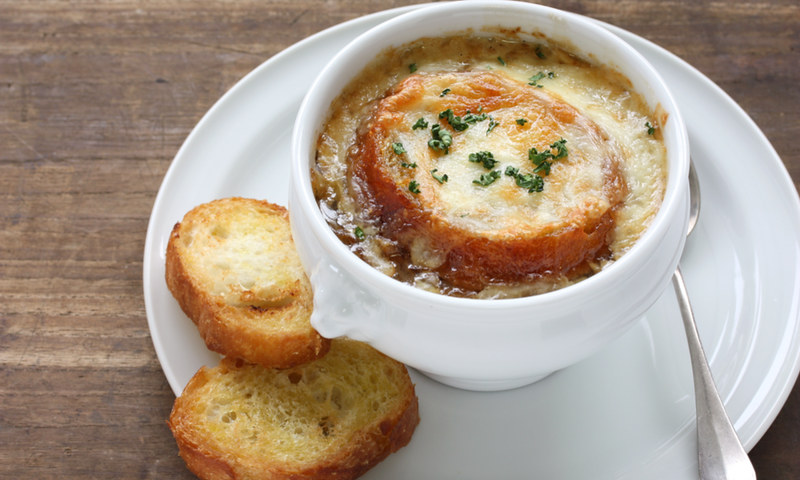 French onion soup takes time is well worth the wait. Photo by sousvideguy/Flickr.

For the toasted French bread

Heat a heavy, 4-quart saucepan over medium heat until hot. Add 3 tablespoons butter and 1 tablespoon oil and all the thinly sliced onions. Turn heat to medium-low and cook the onions slowly for 15 minutes, while covered.

Uncover the saucepan, raise the heat to medium, and stir in the 1 teaspoon salt and ¼ teaspoon sugar, which will help them brown. Cook for 30-60 minutes, stirring frequently, until they have turned an even, deep and golden brown. They should be evenly golden, but not mushy.

Sprinkle the flour over the cooked onions and cook for another 3 minutes.

Preheat the oven to 325 degrees.

In a separate pot, bring the stock to a boil.

Take the saucepan off the stove, once the onions are done, and blend in the 8 cups of stock, the white wine or vermouth, and add salt and pepper to taste.

Return the saucepan to heat and simmer for 30-40 minutes. Add salt and pepper as needed.

While the soup simmers, put the bread on a roasting pan and bake for 30 minutes, until the slices are dried out and lightly browned. After 15 minutes, baste each side with a teaspoon of olive oil. After the bread comes out of the oven, rub each piece with a cut piece of garlic.

Just before serving, stir in 3 tablespoons of cognac.

Pour the soup into individual soup cups or tureens, on top of the rounds of bread and pass out grated parmesan and Swiss cheese to be added by guests or

Pour the soup into individual oven-proof cups or tureens and float the rounds of bread on top and spread the grated Swiss and Parmesan cheese on top, then sprinkle with olive oil or butter.

Bake for 20 minutes in the oven and finish under a preheated the broiler for 1-2 minutes until the cheese on top of brown and serve immediately.

Mastering the art of beef bourguignon for a new Christmas tradition