This year has been a banner one for my garden which has been bolstered by all the time I spend at home, by being the one outdoor space I have to use and by all the extra time I can devote to it that normally I would spend commuting every day.

One of the banner crops that really has pushed its way through the garden, going so far as to knock over a corn stalk, is the zucchini. 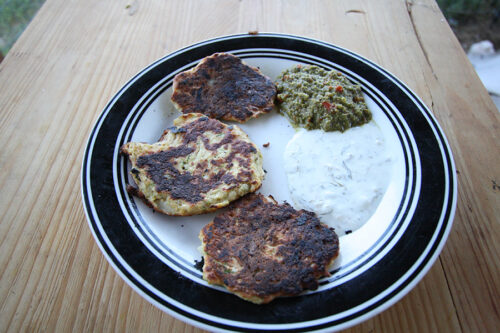 Zucchini fritters are way, other than bread, to easily use up the abundant crop. Here they are served with zhug, a Yemeni cilantro-based hot sauce, and tzatziki, the yogurt-based sauce.

I have so, so many of them and, I have absolutely no doubt that you, or maybe your neighbor, or maybe just the person down the street, is just like me and drowning in a sea of zucchini.

That’s where fritters come in.

Fritter is a broad term for potatoes, zucchini, fruit, meat, dough, and probably many more things, that have been combined and are fried. In this case, the recipe is kind of like latkes (also called potato pancakes), but with zucchini instead.

The comparison is important because both potatoes and zucchini are jam packed with lots and lots of water that need to be removed before they are turned into fritters. It’s the same process that goes into preparing decent hash browns, although usually hand power gets them dry enough for the skillet.

In this recipe, salt will help drain the water out of the shredded zucchini, with the aid of a strainer. That only gets so much water out, so there is a second step. Either the shreds can be wrung by hand or, they can be balled up into a dish towel and wrung out as the towel is twisted. I find the dish towel applies enough force to get most of the water out.

The other reason I chose to write about fritters is they go great with two other recipes I’ve already shared in previous columns, mainly, tzatziki, zhug and hummus. All three make great dips for fritters. 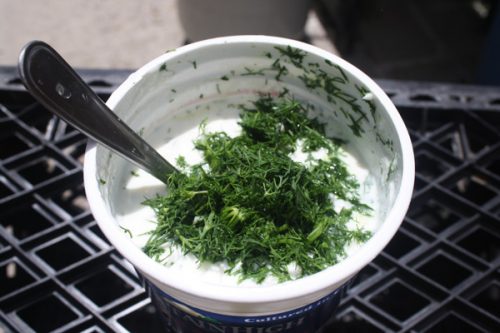 Dill piles up in a container of yogurt being used to mix the Tzatziki.

Dill plays a starring role in tzatziki and it goes great in the fritters as well.  Most herbs would do well as a seasoning but, since I like to pair them with tzatziki, I always reach for dill first. It does not hurt that the dill has also been having a banner year, since it has not, yet, been pushed over or smothered by the zucchini.

One thing that most fritters need is some kind of binder. Here, I use eggs and crumbled feta, as well as a little bit of flour.

When it comes to the frying, use a lot of oil if you really want to go for that deep-fried taste, or use a lot less if you’re using a non-stick pan. I personally use cast iron skillets so a little oil often goes a long way. Alternatively, the fritters could be baked in the oven.

In New Mexico, Chile is king. No questions. No debate. Red, or green? Christmas? (Christmas is both red and green.)

(If you want just the recipe, see it here.) 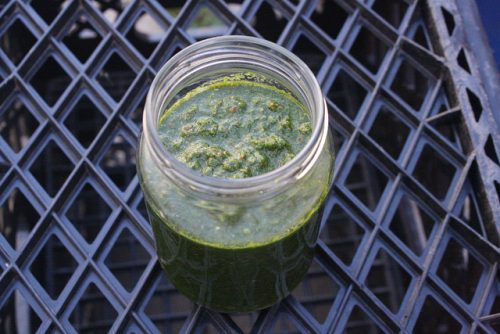 Zhug, after the cilantro and jalapenos and citrus and salt have been blended together. Ready for some fiery consumption.

Cilantro certainly plays a second fiddle, in salsa, as do tomatoes, but still: chile, cilantro, these are the building blocks of many New Mexican meals. So, what does that have to do with zhug? Well, combine those two things into one dish. Blew your mind, didn’t it?

Chile and cilantro are not the sole property of New Mexican cuisine and lots of other cultures do complimentary things with them that I think we should all copy, or at least, pay attention to.

That New Mexico can learn a lot from other parts of the world, including from the middle-east, where zhug originated.

What is zhug, anyway?

It can either be described as a cilantro-based hot sauce (and, depending on how you make it, I mean Hot) or as chile and cilantro pesto. Take your pick. I prefer the former, partially because I make mine scalding.

That’s it. Maybe add some salt, to taste. And you’re done. It’s a pesto-like hot sauce or a hot pesto. Either way, zhug goes well with pita bread and tabbouleh, with some hummus. Maybe you’re going to make zucchini fritters. Add some on the side, along with tzatziki.

I should add, this sauce is very dear to my heart. Being such a fan of cilantro, even naming my blog after a proclivity for it, I gotta say. We all should love zhug.

1. Chop the cilantro, peppers and garlic.
2. Put all the ingredients, sans salt, in a food processor or blender.
3. Blend until it reaches desired consistency.
4. Add a small amount of salt, to taste.

If you want the full gallery of full-quality photos, they are licensed under a Creative Commons 2.0 Attribution-only license. See them here.

Jalapenos in a blender, before being blended, to make Zhug. Add liquid (lemon/lime juice) to aid in the blending process. 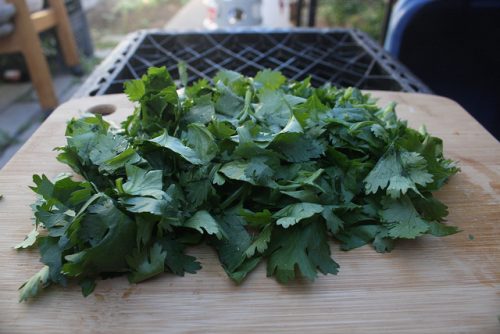 Cilantro, being being chopped up and put in a blender to make Zhug.