This review was originally posted on Goodreads.com and reviews.wheelerc.org on Oct. 19, 2014.

Josh Young falls into that category.

There are a bunch of things that strike the wrong tune with And give up showbiz?, but the most glaring I the book should not be for sale, but should be given away by the book’s subject, lawyer Fred Levin.

Let me clarify: This is a badly written, book-length public relations pamphlet for Fred Levin.

The subtitle of the book is: “How Fred Levin beat big tobacco, avoided two murder prosecutions, became a chief of Ghana, earned boxing manager of the year & transformed American law.”

While the book might actually deal with each of these issues, most are an afterthought and, further, most are boring. Levin sorta beat big tobacco, but he really just made a minor change in the law that allowed other people to sue the companies.

The two murder prosecutions? That’s a gross exaggeration. He was certainly declared a chief of Ghana, an honor he didn’t appear to care about (because, really, why would he care about Ghana?) and yes, he was boxing manager of the year. Woopy-dee-woop, at least, according to what’s written about the subject. 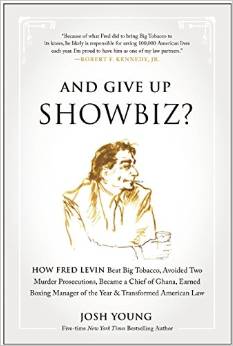 Really, Fred Levin is a fine example of the partier and slacker who gets far in life. I do not pass judgment on this fact. I pass judgment on the terrible quote Levin supplies. (Every single quote in this book appears to have been written by a bad public relations [PR] professional, or amateur.) I will quote many more of these throughout the review.

“Though Fred spent more time in high school cutting up than studying or playing sports, he managed to graduate. ‘Looking back, it’s interesting to think now that only the top students in their class with top SAT scores can become a freshman at this state university’ Fred says. ‘When I entered, all you needed to do was graduate from high school, which I barely accomplished.’” (Page 22)

Later on, we get more terrible quotes about important subjects that are, potentially, very interesting. Fantastic.

So then, we have some biography-unrelated commentary from other people about the O. J. Simpson murder case, from what Johnny Cochran, his lawyer, allegedly said to another man, Terdema Ussery.

“‘I was shocked that he didn’t want to have anything to do with him,’ Ussery says. “I asked him when he and I were alone, and he told me something very profound, which I have never forgotten. Johnnie said, ‘I haven’t talked to him since the trial and I don’t have any need to talk to him.’” (Page 70)

I disagree with the departure from the biography subject, and I disagree with throwing Simpson under the bus. (The case, his acquittal of murder, is described in the book by the author as being, possibly, one of the greatest miscarriages of justice. I do not find this appropriate, because even if one thinks OJ was guilty, he was acquitted. Even if he did not, the prosecutors did not prove their case to the jurors, which is the point of the American justice system.)

Much of the book talks about Levin’s wealth, the things he owns, his houses, all of his status symbols that show he is better than you, me, us, anyone who does not have incredible amounts of wealth used to buy pointless things rather than, you know, help our fellow citizens. In the following quote, the “Carriage House” is one of the houses he owns.

“The Carriage House has several historical display cases. One contains the Nobel Peace Prize won by Fred’s friend Betty Williams in 1976 for work she did to bring peace after centuries of conflict in Northern Ireland. There is also a case with memorabilia from Oskar Schindler, the German businessman who saved 1,200 Jews from extermination by the Nazis in World War II. His life was made famous in Steven Spielberg’s film Schindler’s List. (Page 74)

The next paragraph goes on about a house he owns, once owned by his son, which he is remodeling with a Viking theme, an inside with a “French Louis XIV look, with a portrait of Fred, naturally. The garage will decorated as if it were the Titanic, the Renault is the car steamed up by Leonardo DiCaprio and Kate Winslet.”

We learn such fascinating tidbits about Levin’s wealth as: “Fred has never even slept in his penthouse condo, Triton, which is located at the Portofino resort that his brother Allen developed on Pensacola Beach.”

Young, the author, then lists some of the richy-rich things in the penthouse.

The author, Young, attempts to do a warts-and-all approach to Levin. Levin is a really horrible person, in case one was wondering. He neglected his wife and children in favor of alcohol and the company of his male friends. The book deals with this issue, but, not really. Levin takes his licks, says he’s sorry, but that’s about it. He does not deal with the reason he avoided, and neglected, his own family. Who knows, but I know, I’m interested, to no avail.

We also get pointless, opinionated commentary from the author on things the book is not about. On the history of Pensacola, Florida, with emphasis added.

“The city was the site of one of the very first recorded European settlements on North America. In 1559, the Spanish conquistador Don Tristan de Luna y Arellano arrived in Pensacola, long before the pilgrims on Plymouth Rock . . . Over the years, it was passed back and forth, and had had five different flags fly over it: Spanish, French, British, Confederate, and now American. Oddly, Pensacola now prides itself on that fact and is nicknamed the City of Five Flags.” (Page 16)

And give up showbiz? is boring, filled with terrible quotes, little meaningful commentary or quotes from people other than the subject of the biography and ultimately a waste of time. The subject, Fred Levin, isn’t interesting. Furthermore, no one should have to buy this book. It is a not-so-elaborate public relations pamphlet for an ageing lawyer. Please skip this book.