As a solo traveler, having open travel plans was the entire intention I have when I go so Southeast Asia. I usually land in the big city, stay there for a few days, talk to or make friends with some fellow travelers and figure it out from there.

Whenever people ask me about my travels overseas, this question somehow comes up. When I say that I went without a definite plan, usually, people are thunderstruck, an entirely unfathomable concept, especially without having friends or family in country.

Going without travel plans is totally worth it, though. Things changes. People change. New people come into your life. Sometimes, a whole part of the country will be stuck in a monsoon during the dry season and you decide to flee to where it’s not.

I did not come up with this advice myself. I actually read it on a travel blog that was focusing on Southeast Asia. It was so right.

Maybe you want to go to Chang Mai in the north, or Phuket in the south or maybe you want to join some people on a trip to Cambodia. Maybe in Cambodia, you want to travel with someone. Whatever it is, keep your options open.

Having open travel plans only goes so far. After I landed in Thailand in December, 2015, I was a little lost. It was my first time in Southeast Asia and I hadn’t traveled anywhere outside of work for quite a few years at that point. A few years before, I lived and worked as an au pair in Germany, and backpacked across Eastern Europe, so traveling wasn’t entirely foreign.

I read the travel book (Lonely Planet) and re-read it after arrived in Bangkok. Finally, I got a taxi to take me to the backpacker district, which, in the evening, is one giant party.

I took this advice so seriously that I did not have any hostel reservations. Because I was so smart and decided not to get my SIM card immediately switched over, I was wandering around, paper map in hand, trying to figure out where to spend the night. The first few hostels I found were full up.

Finally, I found an empty hostel that was cheap, super cheap, with some dude sleeping downstairs, acting, I guess, as the hostel guard. Fortunately, they had AC. They were so cheapskate that I was their only customer that night. I passed right out.

Really, I should have already had a hostel reservation, at least for the first night. I later on went to stay at a highly rated hostel (and suggested in Lonely Planet) where I met a bunch of great travelers.

One of those travelers is the reason I was not entirely screwed when I lost my only debit card, yet another lesson. 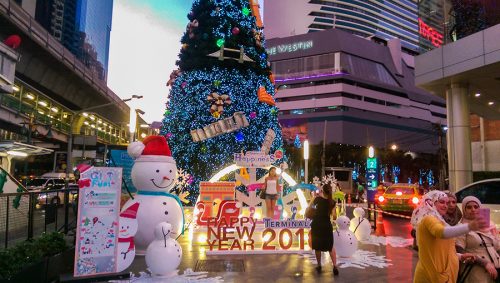 Christmas decorations in Downtown Bangkok. Make sure your travel plans are open enough.