I have a few projects going at all times. In addition to occasionally writing a cooking column, I also cover homicides cases in New Mexico that are otherwise neglected, called NMHomicide.com.

As a part of that project, I’ve launched a new initiative to:

• Track jail/prison/in-custody deaths in New Mexico
• Write about the deaths (those where there are no lawsuits)
• Cover the deaths, when there are lawsuits or criminal prosecutions
• Collate and disseminate primary source documents on them

Here’s the problem: No one tracks jail/prison/in-custody deaths.

Reuters conducted an investigation into jail deaths across the country, but only looked at the biggest jails in the country and in individual states. They released the data they found. Buzzfeed has released thousands of pages of documents released to them in response to a lawsuit over those who died while being held by ICE. 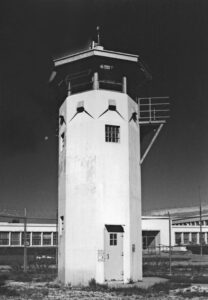 Morning at Tower one, with moon at left. Steve deBurque/Flickr. CC-BY-NC

The Huffington post runs a national database called Since Sandra, intended to track jail deaths since Sandra Bland’s suicide in 2015,  but the reader response has been tepid at best: just 34 reader-submitted tips. Unlike Reuters, there is no easy way to peer into their database and they only have two entries for New Mexico.

As of November 2020, we have recorded 160 deaths in New Mexico, found by combing through Fatal Encounters, the Reuters data, media reports and lawsuits. Many fall through the cracks and we need your help to track them all. Many of the names on the spreadsheet are missing, as Reuters was not able to obtain them. We are filing records requests to find those missing names.

Many other deaths are just plain missing, as are many deaths in privately run prisons, jails and lockups.

Have a death that should be added? Please fill out this form.

The lodestar for this project is Fatal Encounters, which tracks all police deaths, but not deaths that happen in custody, although there is some overlap.

The jail deaths project is currently focused on New Mexico but any deaths from other states will be accepted and inputted into a national spreadsheet/database and any primary source documentation will also be collated and distributed through DocumentCloud.

The federal government is supposed to track these deaths, which should encompass those who dies in jail, in police lockups and in prison, as well as those who die in hospitals after being transferred from custody and those whose deaths could otherwise, reasonably, be considered the fault of the officials who kept them confined. They won’t give out specifics, according to the Huffington post.

If you’re interested, please visit the landing page for the jail deaths project.

New Mexico has multiple county jails that tend to quickly get inmates out of their facilities when it becomes apparent the person in their custody is at death’s door, deaths that otherwise might not be considered “in” a jail setting.

Jail deaths get tricky, as does how to count them. Suicides count. Many “natural” deaths should count as well as lack of medical attention can exacerbate or cause death, including from cirrhosis.

A project by Oregon Public Broadcasting, KUOW and the Northwest News Network is setting out to track deaths in the northwest. Their description of jail deaths (for a dataset that it does not appear they have released) put it this way:

This dataset includes people who died behind bars and those who died after being taken from jail to health care facilities. It consists of both official “in-custody” death records and inmate deaths that did not meet that specific definition. The number of inmate deaths in this data is likely an undercount.

Our database includes those who died behind prison and jail bars as well as those who died after being taken from a detention facility to a health care facility. This also means suicides and those who died in police lock-ups as well as deaths from cirrhosis and other illnesses caused by long-term drug and alcohol use.

Some jail deaths that NM Homicide writes about settled upward of five years ago. We hope that by writing about jail deaths that have not otherwise been covered, we can help create a record, along with the database tracking the deaths. It is our goal to create encyclopedic or Wikipedia-esque entries on each case. This helps identify patterns, like how often qualified immunity shields medical providers. It is also within the structure of NM Homicide.

This database is a collaboration. The point is not to supplant or compete with local coverage (although many parts of New Mexico are news deserts). The purpose is to supplement and help local coverage. Creating a database helps everyone understand what is going on in their communities and to help fellow journalists cover it better.

The current plan for tracking jail deaths is three fold.

1. We want to track and cover all jail deaths in New Mexico. To cover them, we need more writers. Contact us if you’re interested.

2. We want to create collate primary-source documentation on all jail deaths. That means in addition to writing about them, we also want to provide everyone with the documents. Autopsy reports, incident reports, lawsuits, the works. The database should provide as much information, and documentation, as possible.

3. We want to expand the database, including all that primary documentation, to the rest of the country. To that end, we have created a separate form for inputting jail deaths from outside of New Mexico. See that form here.

Before making an entry, please cross reference it with the Reuters database, which we have uploaded to Google Drive, and the Huffington Post database. Unfortunately, Reuters is the only group that has actually released the spreadsheets of their data, although we will be reaching out to other groups.

How we’re doing it

How you can help

• Add to our New Mexico database through this form after checking our spreadsheet
• Add to our nation-wide database through this form after checking the Reuters spreadsheet. Consider also submitting to the Huffington Post’s Since Sandra project. If you’re in Oklahoma, report jail deaths to The Frontier.
• Talk to us if your loved one, friend, partner or someone who knew died while incarcerated.

Suffering from alcohol withdrawals, guards and nurses allegedly refused Ruben Toledo medical care until be started seizing in his cell. Despite losing the ability to communicate, guards carried him to the shower before calling for medical help. He died days later at a hospital.

On March 28, 2014, Daniel Boscon, 46, Bernalillo Police Officer Jeff McGinnis arrested Daniel Boscon for being disorderly. Despite his pleas for medical attention for dizziness and the laceration on his head, he was brought to the Sandoval County Detention Center where he died 30 minutes after being placed in a cell, according to a lawsuit.

Befuddle your sweetheart with some brilliant brownies